Chris Bateman does some terrific sleuthing in the Globe and Mail this week to determine that the girl pictured in the below photo, dated May 15, 1913, is Dora (Dorothy) Cooperman – daughter of Morris Cooperman, a clothing presser. 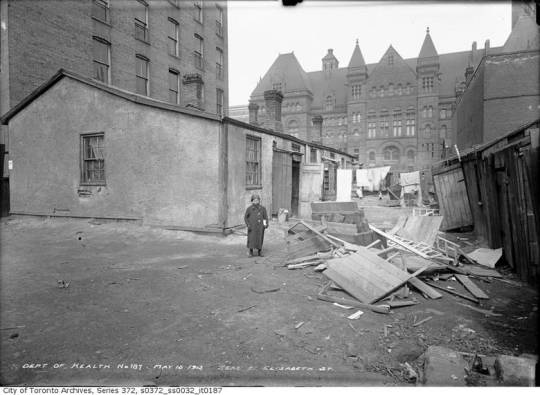 Dora is standing in front of 3 wood-framed “rear houses” located behind 21 Elizabeth Street in an area known then as St. John’s Ward, or simply, The Ward. Behind her is City Hall, which we refer to today as Old City Hall.

If you’re familiar with Toronto, it shouldn’t take you long to figure out that she is standing in what is today the middle of Nathan Phillips Square in front of (new) City Hall.

The Ward no longer exists today, but as far as neighborhoods go its history is one of the most interesting. It was a high-density and mixed-use precinct that served as an important landing ground for successive waves of immigrants until it was deemed a slum and ultimately cleared. I wonder what it would look like today had it remained. Perhaps a bit like Kensington Market.

It housed the Irish fleeing the Great Famine in the 19th century and was the center of Toronto’s Jewish community until the 1920s. The Cooperman family came from Kiev and identified as Jewish.

There are so many interesting aspects to the above photograph. Everything from Dora’s pose to the juxtaposition between her surroundings and the grand (old) City Hall in the background. (Sidebar: I would like to try and recreate this same perspective. Would anyone like to model?)

I also wonder why the city required a report to wake them up to the squalor that was living out in the Ward when they could have, presumably, just looked out their west facing windows.

In 1911, Charles Hastings and Arthur Goss published what Batemen describes as a “landmark report that stunned civic officials, who had long ignored the poverty on their doorstep.” Hastings was the city’s medical officer of health, and Goss was the’s city first official photographer and author of Dora’s above portrait.

One of the interesting things that Bateman explains about this report – and this is really the point of today’s post – is that it supposedly called out one particular housing typology as being highly problematic: rear houses.

These were houses that existed off the main street and could only be accessed via a laneway, like the one Dora is standing in. Today we would call them laneway houses. And so this report is evidence of over a century of anxiety around this particular housing type.

It is obvious why overcrowding would have been deemed a serious problem at the start of the 20th century, but now one has to wonder how influential this report may have been in establishing the tone around these “rear houses.”

Whatever the case may be, Dora’s story is an example of the role that this typology has played in housing people of modest means throughout this city’s history. It is also interesting, but perhaps not a coincidence, that affordability continues to be a part of the pitch around laneway housing and laneway suites.

Dora lived in a laneway house.