Jackson Hole Airport (JAC) has one runway. It is 6,300 feet long by 150 feet wide and it was originally constructed in 1959. In 1965, the first of many proposals was put forward to lengthen the runway to 8,000 feet so that jets could fly into the airport. But it was never adopted. Subsequent proposals were made in 1992 and 1999, but they were again highly contentious and similarly never adopted. The runway remains 6,300 feet long.

Tourism destinations and second home markets like Jackson Hole are heavily dependent on access. In 2003, a total of 211,788 passengers flew through JAC airport and, in 2016, it was over 340,000 people. But second home markets are also the first to get hit during macroeconomics shocks. Following the 2008 financial crisis, passenger volumes at JAC didn’t recover until 2014.

If you look at air traffic throughout the year you’ll also see that it is highly seasonal. Below is a chart showing monthly passenger volumes at JAC from 2003 to 2016 (data from the Bureau of Transportation Statistics). Some of you may be surprised to see that more people visit Jackson Hole in the summer, compared to the winter. But what’s perhaps even more conspicuous is the sharp drop off during the swing seasons. 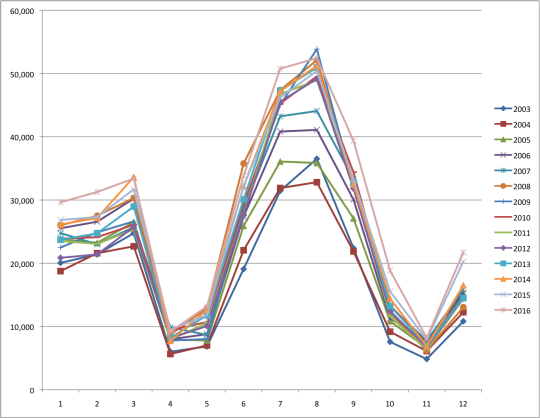 I am thinking about all of this not only because I just got back from Jackson Hole, but also because I am very interested in the demand drivers that fuel the real estate in many of these mountain towns. It’s easy to get it wrong. Unlike major urban centers – which often operate under a perpetual supply deficit – you can’t just build and necessarily expect people to come.

Revelstoke Mountain Resort, for instance, first opened in 2007 with grand aspirations of building one of the largest ski resorts in North America. But they got crushed in 2008 and have never fully recovered – at least relative to their original plans. Maybe the answer is a bigger airport.