A friend of mine sent me this article earlier today with a sarcastic comment about the relationship between housing supply and rents.

The article talks about how rents in almost every Manhattan neighborhood have fallen compared to a year ago because of a flood of new apartment supply coming online. The median rent dropped 3.6% (year-over-year) which is the biggest decline since October 2011. 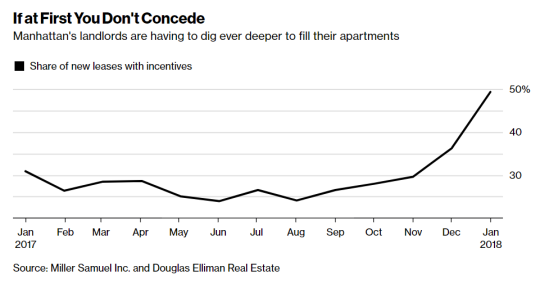 There has also been a spike in the number of leases with some sort of incentive attached to it (see above). As a landlord you typically want to use incentives, such as free rent, before resorting to lower face rents. Because lower rents mean a lower overall net operating income, which in turns depresses the value of your property.

But sometimes you have no choice:

“Landlords have finally realized, ‘OK, we have to adjust these prices because the concessions aren’t doing as much,’” said Hal Gavzie, who oversees leasing for Douglas Elliman. “Customers are looking past the concessions being offered and just looking for the best deals they can find.”

A few weeks ago I wrote about a similar story playing out in Seattle. It’s almost as if excess housing supply is driving down rents.