This week I saw it reported that in this decade alone, the Seattle area is set to deliver more new rental apartments than it did in the prior 50 years combined.

And as a result, the sentiment is that new housing supply is finally starting to keep pace with demand and put downward pressure on rents.

Do you remember who was the crane capital of the US a year ago? They may still have that title.

In some of the most desirable neighborhoods of Seattle – where much of the new supply is coming online – rents dropped 6% compared to the prior quarter. At the county level, this last quarter was by far the biggest drop of the decade according to the Seattle Times. 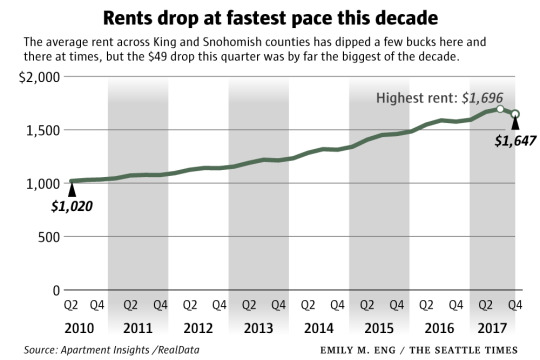 Funny how that works.

It’s also worth noting that the US as a whole is building far more rental apartments than condominiums. Here is a post I wrote in August 2015 which pegged condos as a percentage of overall multifamily construction at around 5.5%. That’s a tiny percentage.