This morning Fred Wilson posted this chart on his blog: 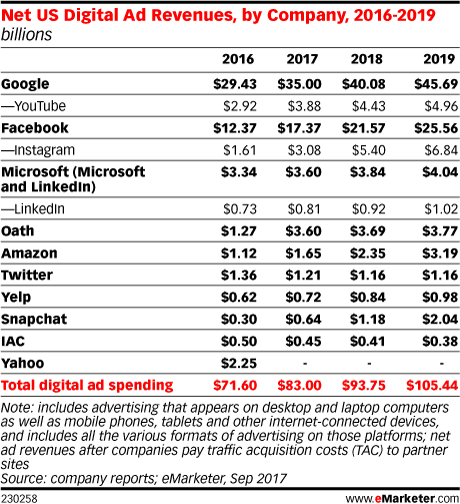 What is clear is that when it comes to US digital ad revenue, it’s the Google and Facebook show, followed by everyone else. Microsoft/LinkedIn is a distant third. Fred calls it “the digital advertising duopoly.” And his view is that the tech industry needs to figure out new approaches to monetization that still allow free content to be consumed.

I’ve said this before, but Facebook buying Instagram for $1 billion seems like a bargain when you look at a chart like this and you see what they were able to do with the platform. Instagram’s 2018 revenues are projected to be bigger than every other company on the list minus Google but including YouTube.

Also notable are the flatlining of Twitter and the projected growth of Snapchat. 2017 was a rough year for $SNAP. But it appears that somebody believes they’ll be able to turn things around with their app redesign and reconstituted ad platform. Be that as it may, it’s still the Google and Facebook show – at least for the time being.