Hines and Boston Properties are the developers of the building. Pelli Clarke Pelli is the architect. And Salesforce is the anchor tenant. In April 2014, it was announced that they had leased 714,000 sf on floors 1, 3-30, and 61. (Get that top floor.) So almost half of the building.

Perhaps not surprisingly, Madrigal calls the Salesforce Tower the “the most visible monument to the industry [tech] in the region and the country.” It is a demonstration of the power and reach of Silicon Valley. San Francisco has a new symbol. The TransAmerica Pyramid now feels inadequate.

Though interesting, this is actually not what I want to talk about today. I’d like to talk about what it took to build such a tall building in a seismically active city like San Francisco. Unfortunately, this feels timely given that the sinking Millennium Tower is getting so much attention right now.

The structural engineer for the Salesforce tower is Seattle-based Magnusson Klemencic Associates (MKA). They are a world-renowned structural and civil engineering firm that have been around since the 1920s. Other projects they are currently working on include the third tallest building in Chicago.

The tower’s seismic force-resisting system is made up of reinforced concrete shear walls that surround the central elevator and exit stair core. These walls are 24 to 48 inches thick. Here is a plan taken from a STRUCTURE Magazine post written by Ron Klemencic of MKA: 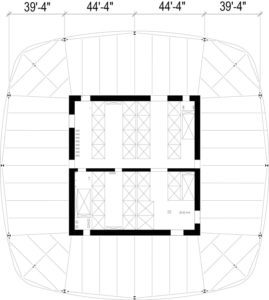 The tower’s foundations have been well documented, or at least frequently mentioned, because of how deep they had to go down. The site has poor soil conditions (fill, sand, San Francisco “old bay clay”, and weak bedrock), and so given the weight of the tower the only option was to go down to bedrock – approximately 250 feet below grade.

The foundation system they ended up going with uses something called Load-Bearing Elements (LBEs). The typical LBE measures 5′ x 10.5′. The entire foundation system uses 42 LBEs and a mat foundation that varies in thickness from 14′ around the core to 5′ around the perimeter. (See image below.) The LBEs were brought down to rock. And in some cases, they went down more than 310 feet below grade. 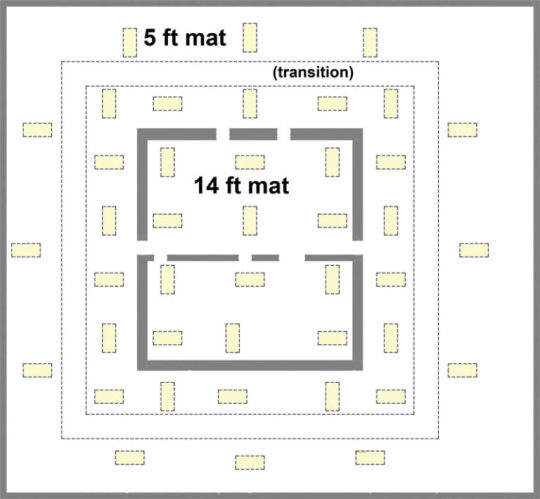 As a condition of buying the site, the Transbay Joint Powers Authority required proof that any future tall building would not negatively impact the surrounding structures – including the adjacent Transbay Transit Center – and that it would perform under a Maximum Considered Earthquake (MCE) event.

So while the tower itself may be a symbol for the new world, its structural system also achieves many firsts in terms of how to build a supertall in a seismically active region.

Please keep in mind that I am not a structural engineer. I just pretend to be an architect sometimes. If you’re interested in more of the details, check out the post by Ron Klemencic. All of the above information was taken from there.