This morning I presented and sat on a panel at BILD called “bringing laneway suites to Toronto.” The other participants were Councillor Mary-Margaret McMahon, George Pantazis (Planner at the City of Toronto), Mike Collins-Williams (Director, Policy at OHBA), and Andrew Sorbara (co-founder of Lanescape).

Here is a photo that Mike took of me while I was talking about my failed laneway house: 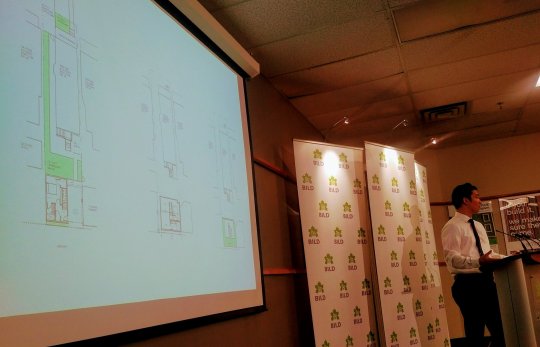 For those of you wondering if/when this will happen in Toronto, here are the key takeaways from this morning: The city is already drafting laneway suite policies specific to Toronto & East York (not the other parts of the city) and they are due to report back to council in Q2-2018. Nothing is 100% certain at this stage, but there’s lots of optimism.

Councillor McMahon delivered this morning’s opening remarks and I was impressed by her deep commitment to laneway suites. I was also impressed by her stance on NIMBYISM, saying that education is important and that we can’t let NIMBYs stop what makes sense for the greater city.

She gave the example of the 6 storey condominium in her ward that faced fierce community opposition a number of years back. If you can’t put a midrise building on a main street in this city, where can you put it?