I recently discovered this marvelous chair (image from here): 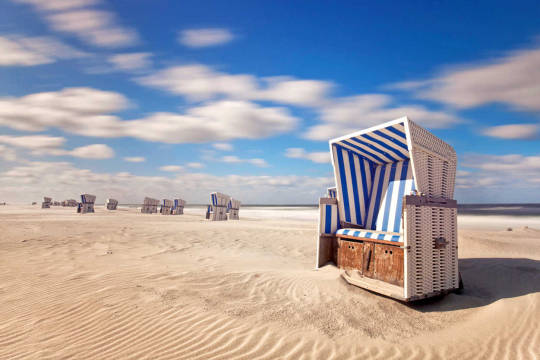 It’s called a strandkorb, which is a German word that translates into something along the lines of “hooded beach chair.” It was invented in the late 19th century by a basket maker looking for protection from the elements on the beach.

Apparently they are fairly ubiquitous at resorts along the North Sea and Baltic Sea and are a bit of a cult object in Germany. They are a symbol of holiday fun, but also, to some, a symbol of German resiliency in the face of adverse weather.

For me, the beauty of these beach chairs is that the “hood” blocks the wind. So if you orient yourself toward the sun, you could actually feel quite warm even when it may not be the perfect beach weather. They extend the season, which is paramount in cooler climates.

I guess that’s why they have stuck around since the 1880′s. If you check out some of the (Google) photo spheres in beach towns in northern Germany, you will definitely find many a strandkorb.