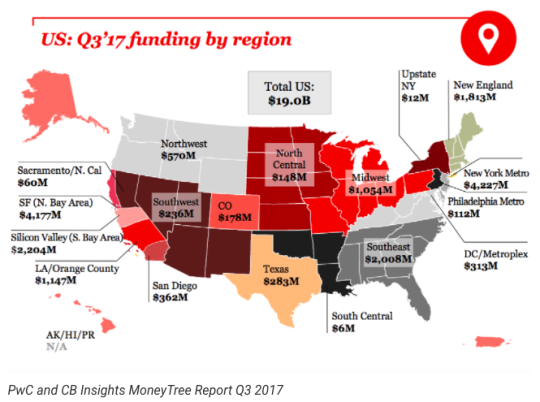 The Q3 2017 Moneytree Report from PwC and CB Insights was recently released. It tracks venture capital trends in the US and globally.

Last quarter, US venture capital-backed companies saw $19 billion in total funding across 1,207 deals. Perhaps most notably for the US, funding in the NY metro area rose 57% to $4.227 billion and inched out the San Francisco Bay Area ($4.177 billion).

But this was really because of two epic rounds to WeWork (NYC HQ) totalling around $2.5 billion. Also, Silicon Valley ($2.2 billion) is tracked separately to the San Francisco Bay Area in the report.

Still, there’s a real sense that the New York tech ecosystem is on the rise and that it is probably furthest ahead in the US in terms of being able to catch up to California.

Last week, MongoDB (NASDAQ: MDB) went public. Albert Wenger, who is an investor in the company, argued on his blog that this is an important milestone for technology companies based in New York.

You don’t have to move to the Bay Area to win in tech.