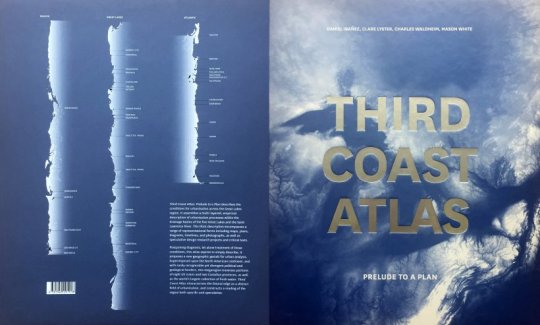 The Great Lakes represent the world’s largest collection of freshwater; a feature that is likely to become

more valuable. Their coastline is longer than the Atlantic and the Pacific coastlines of the US, combined. Hence the name “Third Coast.”

The reason the book is called a “prelude to a plan” is that it doesn’t propose a plan or a path forward. Instead, it is focused on analyzing the current state. Here is an excerpt about the book taken from the Daniels Faculty:

Third Coast Atlas: Prelude to a Plan describes the conditions for urbanization across the Great Lakes region. It assembles a multi-layered, empirical description of urbanization processes within the drainage basins of the five Great Lakes and the Saint Lawrence River. This thick description encompasses a range of representational forms including maps, plans, diagrams, timelines, and photographs, as well as speculative design research projects and critical texts.

I find this topic fascinating and I suspect that many of you might as well. It’s also an important one. So I wanted to get it on your radar. If you happen to be in Toronto next week, the launch/book signing is happening this Tuesday, October 24, 2017.