Below is a chart from Benedict Evans comparing annual revenue from the Wintel era (Microsoft + Intel) to the current GAFA era (Google, Apple, Facebook, and Amazon).

His argument is that, today, “the scale of tech winners” is about 10x what it was during the previous cycle. 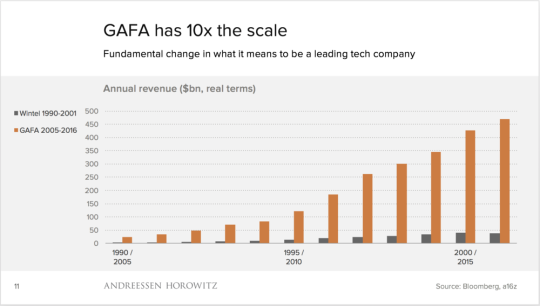 And here is a chart, from that same post, showing how the internet ate print ads when it comes to global revenue: 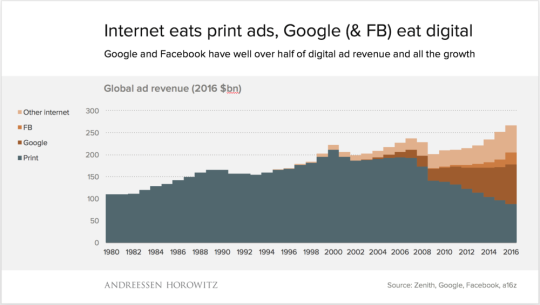 A lot of this has to do with the unprecedented growth of smartphones and the sheer number of people who came and are coming online. Mobile is 10x the PC market.

But the other interesting narrative from the post is the argument that these companies (GAFA) have learned from previous generations just how aggressive you need to be to survive.

The shift to mobile posed a structural threat to Facebook. At the time of its IPO, there were serious doubts as to whether the company would be able to pull off this transition.

Which is why the founder went out and spent 10% of the company to acquire companies that would help with this transition and ensure its survival. That seems to have worked.

In the words of Andrew Grove: “Only the paranoid survive.“ And in today’s tech world, the rewards for surviving are that much bigger.