“The term “bubble” refers to a substantial and sustained mispricing of an asset, the existence of which cannot be proved unless it bursts.” – UBS

Last week UBS released its 2017 Global Real Estate Bubble Index. At the top of the list was none other than Toronto, followed by Stockholm, Munich, Vancouver and Sydney. And at the bottom of the list was Chicago – a city that UBS feels is undervalued. 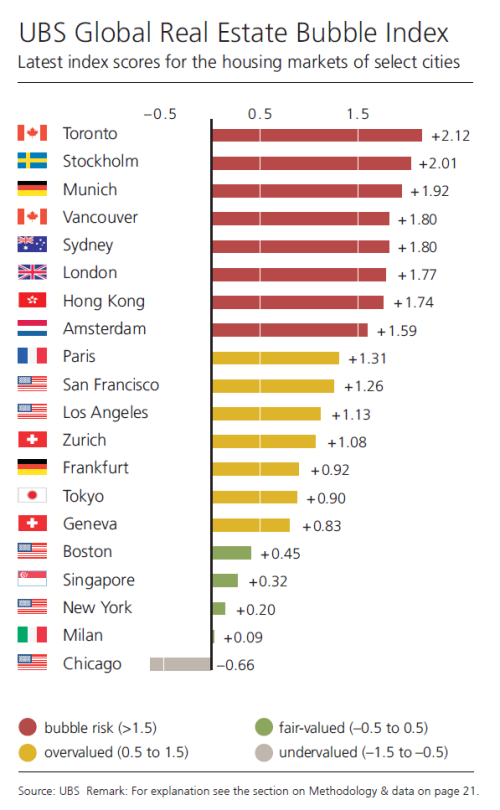 The UBS index is a weighted average of the following five sub-indices:

If you look at their price-to-income benchmark in isolation, Toronto drops down to the middle of the pack along with Geneva and San Francisco. Hong Kong, London and Paris sit at the top with the most unaffordable housing.

One of the challenges, of course, is that the capital flowing into real estate is not all local – it’s also global. And many cities around the world are seeing high price-to-income multiples, perhaps because of that.

So exactly how much decoupling from local fundamentals should now be considered reasonable in our globalized world? And to what extent is this a result of “superstar economics?”

Here’s an excerpt from the UBS report:

The economics of Superstars explains why, in some professions, show business for instance, “small numbers of people earn enormous amounts of money and dominate the activities in which they engage.” By analogous reasoning, prices in the most attractive cities are expected to outperform average cities or rural areas in the long run. Hong Kong, London and San Francisco are exemplars of this theory.

The intuition is that the national and global growth of high-wealth households creates continued excess demand for the best locations. So, as long as supply cannot increase rapidly, prices in the so-called “Superstar cities” are supposed to decouple from rents, incomes and the respective countrywide price level.

I guess this is one of the reasons why bubbles are proven after the fact. If you would like to download a copy of the full UBS report, click here.