Richard Florida and Joshua Gans just published an article in Politico called: Trump Is Making Canada Great Again. The overarching argument is that as the US closes its borders, Canada benefits. The best and brightest from around the world are coming here.

This fall, international student applications at the University of Toronto were up 70% compared to last year. And numerous companies in Toronto are reporting “steady, double-digit increases” in the number of job applications from Americans.

This is exactly what I was getting at when I made the pithy prediction that Amazon is going to choose Toronto for HQ2. It’s about access to human capital (though I acknowledge the political reality of selecting a city outside of the US).

Perhaps here or here might work for a location.

Here is an excerpt from the Politico article that starts to speak to the importance of foreign-born workers in the US:

As of 2013, foreign-born workers in STEM fields—science, technology engineering and math—accounted for nearly a fifth of workers with bachelor’s degrees in the United States, 40 percent of those with master’s degrees and more than half of those with Ph.D.s. In the San Jose metro area, consisting largely of Silicon Valley, immigrants comprise more than 55 percent of adults who hold advanced degrees.

Here is a chart showing the US and Canadian metros with the highest percentage of foreign-born residents: 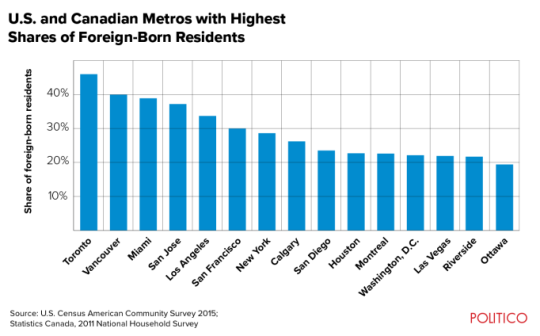 And here is a chart showing which metro areas receive the most venture capital dollars (in millions of US dollars): 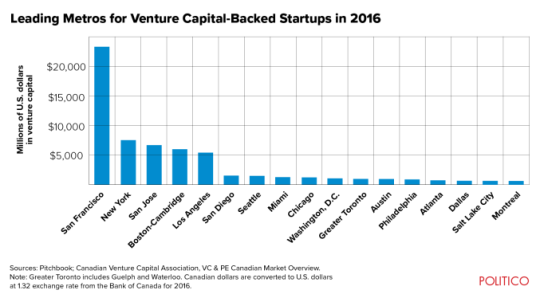 However, when you look at venture capital dollars invested, Toronto is nowhere near the top. Vancouver isn’t even on the list. And I suspect that some of you are surprised to see Miami sitting in between Chicago and Seattle (arguably a city that overperforms in tech relative to VC dollars invested). I was.

Perhaps Trump will help with this by making Canada great again.