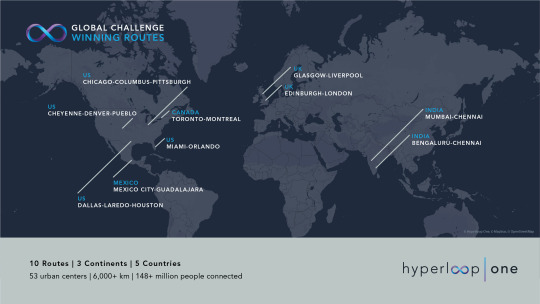 On September 14, 2017, Hyperloop One announced the 10 winners of its Global Challenge. These are the world’s “most promising” Hyperloop routes; selected through a process that began in May 2016 and involved more than 2,600 registered teams.

If you aren’t familiar with what Hyperloop One is trying to accomplish, here is a quick video explaining the basics. Their goal is to have the world’s first operating Hyperloop by 2021.

If you happen to live in one of the above regions (about 148 million of us do), then you are probably already seeing the headlines in your feeds. For Canada, the promise is of connecting 25% of our country’s population with one single Hyperloop route.

It would mean Toronto-Montreal in just 39 minutes:

This is shorter than many morning commutes. So it’s not hard to see why this is a tantalizing proposition. It would mean a union of our two biggest cities and our capital. More accessible Montreal bagels. And maybe, just maybe, a strengthened sense of bilingualism in this country.

But there are also critics who believe that all of this Hyperloop hype is simply a distraction. Why not focus on proven technologies as opposed to some fanciful pipe dream that may never materialize? This is about stroking political egos as opposed to real progress.

My views are pretty simple on this one.

Will Hyperloop Canada happen? Maybe. Maybe not. I sure hope it does. But it may not. It’s easy to draw lines on a map. It’s much harder to actually execute on those lines. And of course, logistics aside, the technology is still being developed.

But if all we ever focused our energy on were things that have already been “proven”, we likely wouldn’t create many new things. Things that today are proven, were once unproven. But they became proven because there were folks who didn’t let that minor detail deter them from trying. They went for it.

So if a private company would like to go out and raise $160 million from private investors to try and figure out how to sustainably connect Canada’s two largest cities in 39 minutes, I am more than happy to cheerlead. Because I’m not the one trying. Who am I to naysay?