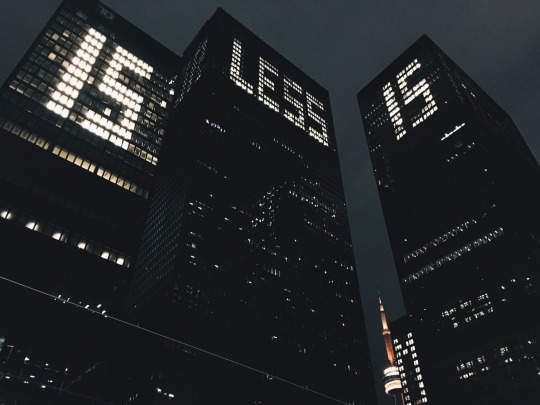 Last night I went by the Toronto-Dominion Centre to check out the above public art project by French artist Aude Moreau. The message on the buildings is “LESS IS MORE OR”, which is a play on the architect Mies van der Rohe’s famous adage: “Less is more.” Here, the “or” is meant to make you question it.

All of this is to celebrate the 50th anniversary of the Centre. The first tower was completed in 1967 and is one of Mies’ last projects before he died in 1969. His original plan included two towers and the banking pavilion at the corner of Bay and King, but three more towers were later added.

This is Toronto architecture at its absolute best. And it may not have happened without people like Phyllis Lambert. I am so glad it did.