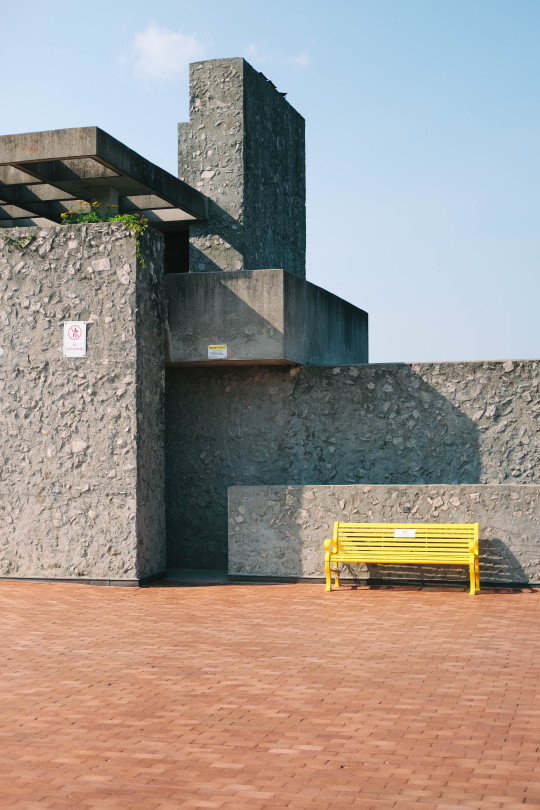 This afternoon I walked Trent University’s campus with my father on our way back from the cottage. It is embarrassing that it has taken this long.

Trent University straddles the Otonabee River in Peterborough, Ontario. It admitted its first students in 1964 and by the early 1970s the renowned Canadian architect Ron Thom had completed the campus plan and its original college buildings, including Champlain College, Lady Eaton College (originally a female-only dormitory), the Bata Library, and the Chemistry Building.

The photo at the top of this post is one I took of the south elevation of Champlain College, on the north edge of the west bank’s main plaza. (Yes, the sign on the far left says “no skateboarding.”)

Rob Thom is perhaps not as well known as other Canadian modernists such as Arthur Erickson. But his two masterpieces – Massey College at the University of Toronto and this campus – were instrumental in helping to define modernism in Canada. It is a shame that alcohol and illness ended his life at the young age of 63.

The first thing that struck me was the rubble aggregate walls. I immediately went to touch them. (See, again, above.) That, combined with the very clear Prairie influences and the terracotta colored pavers, gave the campus grounds an incredible warmth.

Also notable was the connection to the natural landscape. Around the corner from where I took the above photo was a staircase leading down to the river. At the bottom of the staircase was a broad set of concrete steps and a handful of young people jumping in and out of the water.

If you happen to find yourself in this part of southern Ontario, I would encourage you to check out Thom’s campus. And maybe bring your bathing suit.