Friend: Ever go to Jilly’s?

Me: What about you? [Addressed to random guy in elevator]

Random guy in elevator: I’m from Portland. I don’t know what you’re talking about.

I went to check out the new Broadview Hotel last night in Riverdale, Toronto. (Riverside if we’re being pedantic.)

Originally built in 1891 and most recently a boarding house with strip club at grade (Jilly’s – the best party in town!), the building was acquired in 2014 by developer Streetcar and turned into a “58-room boutique hotel and charismatic gathering spot.” The soft opening was July 27, 2017.

Besides the pink neon above the lobby bar (which is obviously great), I really like what they did in the stairwells. Credit to Supermilk Studio. Here’s a photo I snapped last night while trying to find the WC: 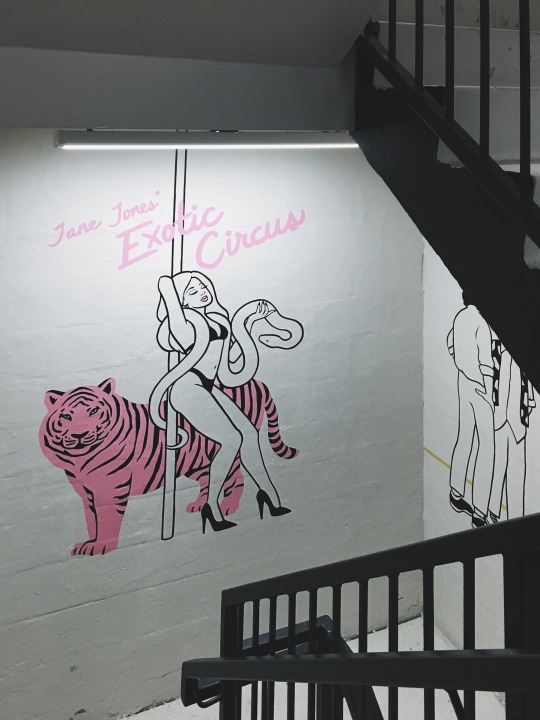 Each floor is painted with murals that pay tribute to the building’s history, from the early days of Dingman’s Hall to its most recent iteration as Jilly’s.

Interestingly enough, the building originally served as an important social hub for the community, though it did not initially house a hotel. On the ground floor was a bank (see, there’s a long tradition of this) and above it were offices and grand meeting halls.

It wasn’t until the original developer sold the building that it was converted to a hotel and granted a liquor license. It’s worth noting that this conversion is said to have faced stiff community opposition. A hotel that serves alcohol to people? Not in my 1906 backyard.

With the reopening of the new Broadview Hotel this summer, you could argue that east of the Don River is once again regaining its grand gathering spot. And the feeling I got when I stepped foot inside the hotel last night was that it was time. The demand was latent and, yes, condos wouldn’t have cut it.

At the same time, this is obviously bigger than the east side. There are many who don’t know this building’s infamous history. Jilly’s? What’s that? Time to go for a walk in the stairwells.