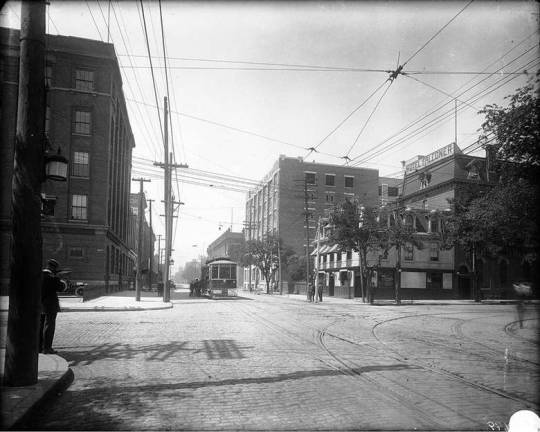 Over the weekend, Marcus Gee of the Globe and Mail published a terrific article about Toronto’s King-Spadina district and how “condos conquered a rundown district of the city.” (This post will argue that condos were not the catalyst, but an outcome of other changes.)

The image at the top of this post (City of Toronto Archives) is the intersection of King Street and Spadina Avenue around the early 1900s. And here is roughly that same view from May 2016 (Google Streetview): 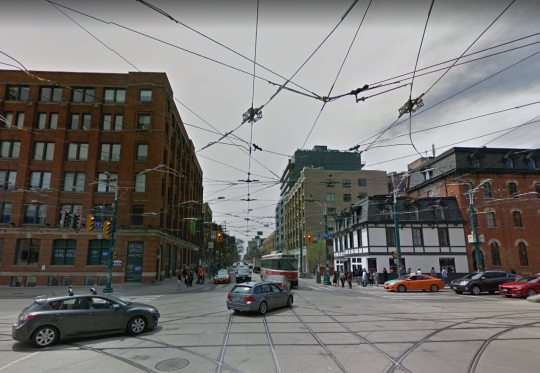 From this perspective, it may look like not much has changed. The buildings at the two corners are still there, although their uses have changed. The streetcars are still running, although we now have slightly newer machines. And there are overhead lines providing a canopy across the intersection.

But as Gee points out, the reality is that in recent years King-Spadina has arguably seen more change and development than any other precinct in the city:

No fewer than 99 projects have been built, approved or pitched since 2004. That’s one quarter of the total for the entire city and more than the count for two vast suburban districts – Scarborough and Etobicoke – combined. King-Spadina is overtaking even high-rise hubs such as Yonge and Eglinton in midtown Toronto and the Bay and Yonge corridors downtown.

Below is a diagram showing the built form of that change. 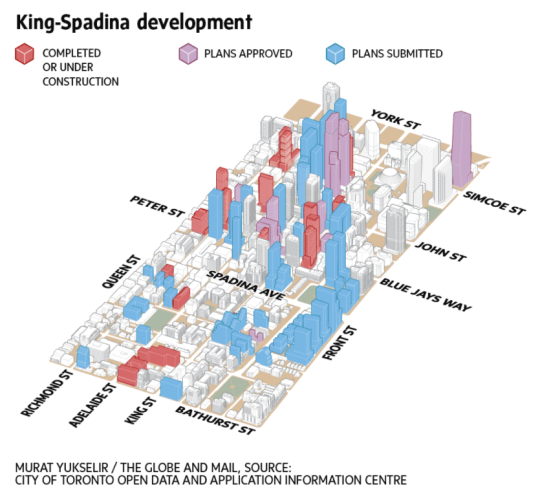 But as we talk about this massive change, I would argue that this didn’t happen by accident.

King-Spadina has indeed reinvented itself many times. Prior to its current iteration, it served as a manufacturing district and as the center of Toronto’s garment industry. But from the 1970s through to the early 1990s, the area fell into decline as its manufacturing base left.

The game changing moment happened in 1996 when “The Kings” – which includes the areas around both King-Spadina and King-Parliament – were redesignated as “Regeneration Areas.” The overarching goal was to deregulate away from single-use industrial zoning and allow the area’s buildings, both old and new, to take on almost any use.

Now all of a sudden it was possible to have light industrial, commercial, entertainment, retail, residential, and live/work uses all mixed together. And with the bones already in place, the market responded.

In my view, it is these earlier changes that laid the groundwork for what has become one of the most exciting neighborhoods in the country.

However, today some are worried about whether or not this is too much of a good thing. And I am sure that many would like to blame developers for piling up in this neighborhood. Why continue to build here when there’s lots of land elsewhere?

King-Spadina is a perfect example of what Richard Florida would call “winner-take-all urbanism.” There are powerful clustering forces at play both globally and locally in our cities. And so there are real economic reasons for why King-Spadina has seen more development than Etobicoke and Scarborough combined.

Permissive land use policies and the right building stock may have kickstarted things, but now economies of agglomeration have taken over. Retailers, restaurants, clubs, tech companies and people, among many others, are now fighting for space in this area for the same reason that Toronto’s garment industry once felt the need to cluster here. There are tangible benefits to doing so.

What people are effectively asking today is at what point do we start to see diseconomies of agglomeration. This is an important question and one that needs to be actively managed.

Without getting into any of the details, I believe that the King Street Pilot Study – which puts transit first along the King corridor – is one very appropriate answer to this question. It is a direct response to diseconomies of agglomeration, in this case traffic congestion.

But there are important corollaries to this question that are also worth considering: How do we now create more King-Spadinas and how do we create more broad-based and inclusive urbanism in the face of these powerful clustering forces? These are questions that go well beyond King-Spadina, but there are lessons to be learned from the successes seen on the west side of downtown Toronto.

Images via The Globe and Mail and Google Street View