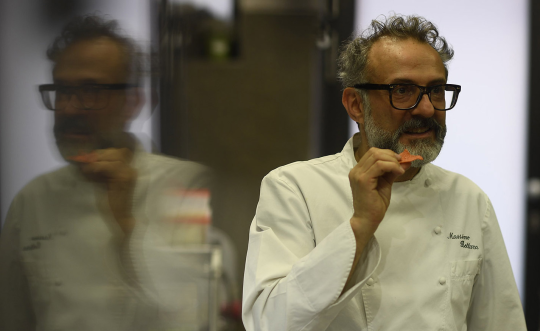 But when should you not listen?

But it wasn’t easy for Massimo at the beginning. His goal was to bring the Italian kitchen into the 21st century and so his plates are often creative takes on classic Italian dishes. His restaurant blends the old and new; food and contemporary art.

This approach upset a lot of people at the outset. Massimo was seen almost as a traitor who was turning his back on traditional Italian cooking within provincial Modena. Don’t mess with centuries of tradition they would say. Grandma knew best, son.

Because of this, his restaurant sat empty in the early years, to that point that he was ready to close its doors. The only reason he kept it open was because his wife encouraged him to give it one more year. She said: This is the kind of food you want to make. If you don’t try, you’ll regret it.

So he gave it another year and luckily he got a few breaks, including a glowing review by a well known food critic from out of town. Once this hit, the Modenese started to quickly rethink their distaste for Massimo’s idiosyncratic dishes. Before long, his restaurant was full.

But there’s risk in liking something new that hasn’t been done before. Change creates uncertainty. And if Massimo’s wife hadn’t encouraged him to stick with it just a bit longer and ignore the naysayers, the world may not have one of its top restaurants.

Sometimes we don’t know what we like and want until we are shown.