According to NewGeography, ~85% of the population in the 53 major metropolitan areas in the U.S. lives in the suburbs or the exurbs. (Data from 2011-2015.) And according to some definitions, a number of these cities could be classified as being 100% suburban.

NewGeography recently looked at America’s most suburbanized cities using the “City Sector Model” of classification. Here’s generally how it works:

Based on the above criteria, here are the top 10 most suburban cities in America: 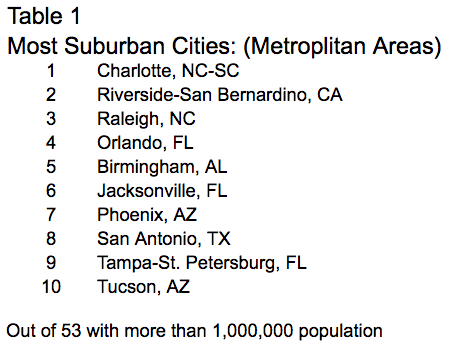 All of these cities have virtually no urban core. To break the 10 way tie, they were simply sorted based on the size of their exurban population. To see all 53 metropolitan areas, click here.