There’s an argument going around these days that rural America is the new inner city. That is, rural America has replaced inner cities as the geographies facing the greatest socioeconomic challenges.

In fact, it’s time for the stigma associated with the term “inner city” to disappear – if it hasn’t already. Blight no longer seems to be the concern. Instead, the concern is that our inner cities are becoming exclusive enclaves for the rich.

The United States Department of Agriculture recently published data on educational attainment within rural areas. And since education is one of the biggest drivers of economic prosperity, it’s valuable to look at this data.

The first thing to note is that while educational attainment within rural areas is increasing, it still lags urban areas: 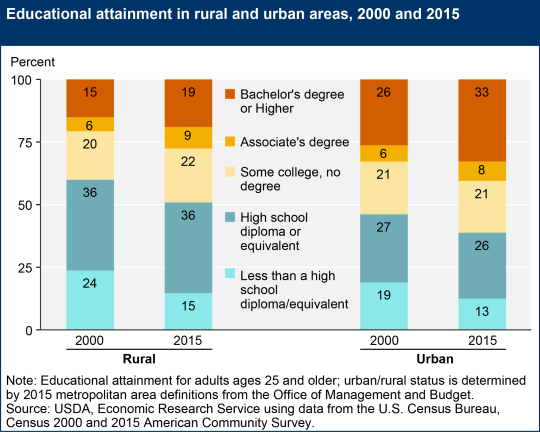 The second thing to note is that even with the same level of higher education, the labor market will generally pay you more if you live in an urban area: 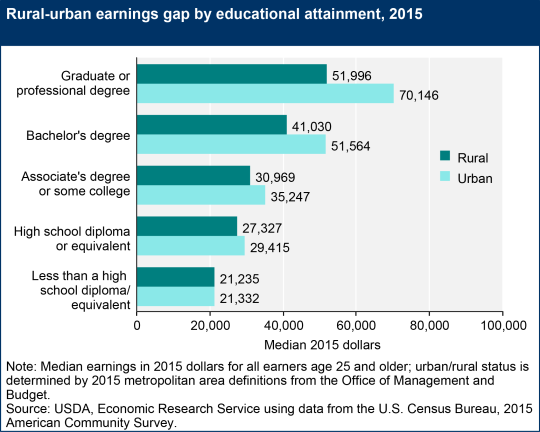 However, the spread between rural-urban increases as you move up the education ladder. With less than a school diploma, there isn’t much difference. But with a graduate or professional degree, there’s about a ~35% increase in earnings, on average, according to the above chart.

So it should come as no surprise that many smart and educated people are choosing to live in urban areas. They should make more money.

All charts from the U.S. Department of Agriculture.