Farhad Manjoo of the New York Times published an article this morning about Opendoor – a startup that I have written about multiple times on this blog – called, The Rise of the Fat Start-Up. (His definition of “fat” is that the startup owns lots of hard assets, which considered atypical in tech.)

Below are a couple of interesting tidbits from the article:

The article also quotes a blogger and real estate analyst named Mike Delprete. Heads-up: His blog is called “Adventures in Real Estate Tech.” I’m sure this will appeal to many of you. I obviously just subscribed.

Mike dug into MLS records in order to figure out Opendoor’s transaction volumes, since the company is not releasing this information. Here’s what he found (the chart is up to March 2017): 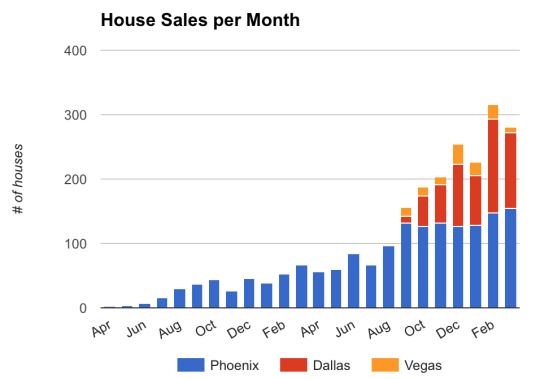 The trend line is certainly moving in the right direction. But Mike also believes that Opendoor is only netting around $8,320 in profit per home and that much of it is driven by appreciation. There’s also substantial risk in owning so many homes – each one is usually held for a few months.

But you can be sure they’re thinking well beyond where they are at today. Expect many more updates on this blog.