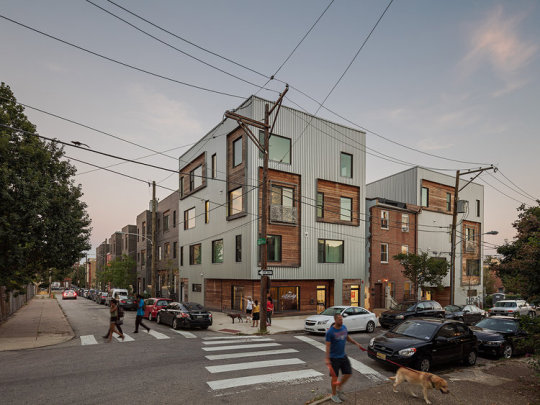 Dezeen recently featured the above project in Philadelphia by Interface Studio Architects. It’s called Powerhouse and the goal was to provide a variety of different housing typologies and tenures within a dense infill project that, at the same time, remains in keeping with its context.

The full block complex contains 31 residential units, which are a mixture of apartments, duplexes (stacked towns), live/work units, and single-family townhouses. There’s also a corner retail space. 10 of the units are rental and the balance are for sale. The development also incorporates 3 existing rowhouses on the block. (Were these the holdouts?)

Here is a diagram from ISA to give you a sense of how these different housing types come together: 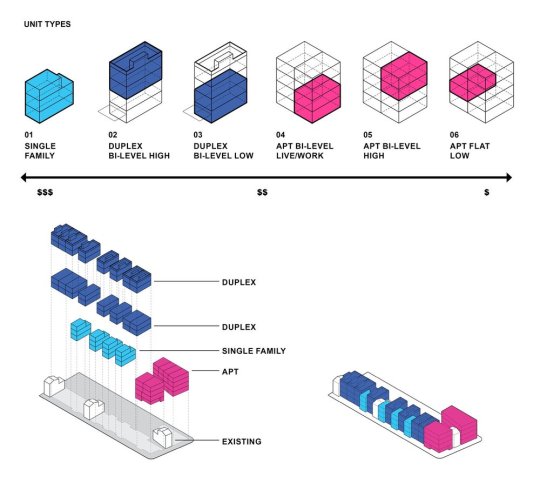 The project feels germane to Philly’s urban fabric and it is certainly interesting in its own right. But for those of us from Toronto, it’s perhaps even more interesting because it’s a scale of infill development that we don’t see very often in this city: low-rise intensification. (Also commonly referred to as “The Missing Middle”.)

Recently I’ve been speaking with a number of people about whether or not Toronto should be thinking differently about its low-rise neighborhoods. Because as it stands today, even this sort of gentle density can cause quite a stir.

Two thoughts immediately come to mind – one of which will not surprise anyone who reads this blog. Firstly, I see laneway housing as an elegant way to intensify low-rise neighborhoods without changing their character. That’s why I’m proposing this house.

Secondly, I have long felt that we should rethink how we treat arterial roads that are not designated as “Avenues.” That is, we should encourage greater densities. An “Avenue” designation signals mid-rise. But absent this, our policies are frankly retrograde, given the way some of these arterial streets have evolved over the years.

What are your thoughts about this scale of infill?