One of the most widely read posts on this blog is this one here, called: Why it’s next to impossible to get a laneway house built in Toronto. Clearly, there’s a tremendous amount of interest in this housing type both here in the city and elsewhere.

Since I wrote that past over 2 years ago, I have been bombarded with emails from people asking me the status of the project and if I could help them achieve something similar on their properties. And my response was always the same: sorry, the project is on hold.

But over the last few years, things have changed. Home prices have risen dramatically in this city. At the beginning of 2017, the average price of a detached house reached almost $1.6 million – representing a year-over-year increase of nearly 30%!

In part because of this, laneway housing has also entered mainstream consciousness thanks to groups and initiatives such as The Laneway Project, Lanescape, Evergreen, the University of Toronto, and so on. There are now Councillors advocating for them within City Hall, which was not the case even a few years ago.

Given all of these changes, I decided that it was time to dust off my laneway house design and make a serious go at it. So I called up my architect friend Gabriel Fain and asked him if he would help me pioneer this new housing typology. He immediately said yes.

Last week a revised version of Mackay Laneway House was submitted to the city, kick-starting the approvals process. Here’s a rendering showing the north elevation (view from existing house): 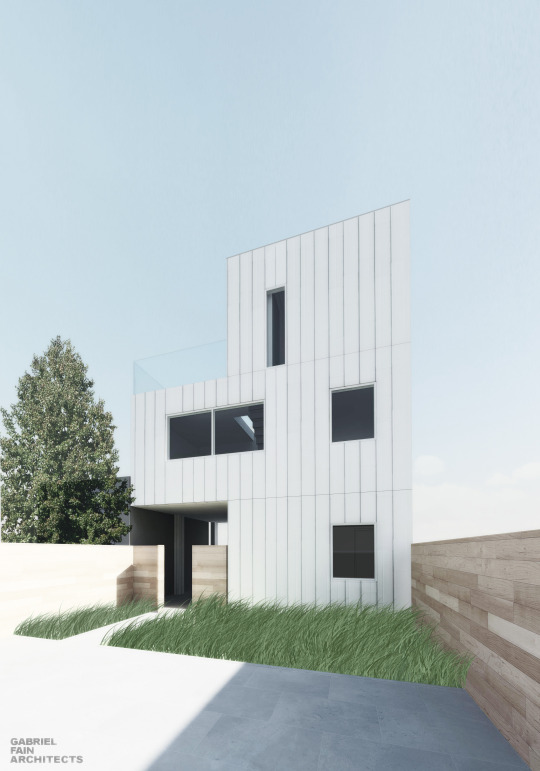 The next step will be a trip to the Committee of Adjustment to obtain the necessary variances. But even with all of the momentum building in the city right now around more affordable housing solutions, this will not be a slam dunk.

So in parallel to all of this, we have also launched a new website called lanewaylove.com. Here you will find general information about laneway housing, as well as floor plans of the proposal. But most importantly, we hope it will serve as a tool to generate support for this and other laneway houses in Toronto.

At the bottom of the site is a link that will allow you to support Mackay Laneway House by submitting your name, email, and postal code. The reason it also asks for your postal code is so that we can anonymously match supporters with specific areas of the city. We think this will be valuable information going forward.

If you believe that Toronto would be well-served by more affordable and sustainable housing solutions, I would encourage you to sign your name at lanewaylove.com and share this post with your network. We would greatly appreciate your support.