You can’t have an Easter dinner in Toronto right now without somebody bringing up the topic of our “crazy” real estate market.

Below is a chart from Bloomberg showing the year-over-year change in home prices in the Greater Toronto Area since 1990. It also shows the historical average (in blue) and how in March 2017 we hit 4 standard deviations above that. Home prices rose 33% in March compared to a year earlier. 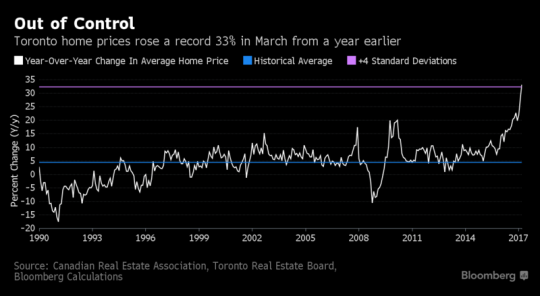 If I were a realtor, I’d probably tell you that the market is hot hot hot. Now is the time to sell because you’ll get some absurd number above your asking price and now is the time to buy because prices are going nowhere but up. Don’t miss out.

I would like to try and be a bit more nuanced than that. Here are 3 thoughts:

There’s no question that low rates / cheap money is one of the root causes of the real estate valuations we are seeing today. But frankly I have no idea when or if that will change. There is an interesting argument out there that capital is no longer scarce. Our economy is going through a fundamental shift, which is why real estate is not the only asset class seeing these sorts of valuations and growth figures.

There are a number of global factors which are helping to cement Toronto’s position as an alpha global city and destination for human capital. Think Trump, Brexit, and so on. I agree with Richard Florida’s argument that our real estate market will see more – not less – pressure going forward. Here is a snippet from a recent interview with Florida in Toronto Life:

I think Toronto is going to get an even bigger influx of the creative class. With the rise of Trumpism, more and more people who might otherwise have gone to the United States are going to come to Canada. We’re going to see American tech companies invest more and more in Toronto. And if we think the housing affordability and economic divide we see today is bad, it’s going to grow ever more gaping.

I believe that there are always opportunities in the real estate space, but that you have to be disciplined, focused on fundamentals, and willing to do things that others won’t. What bothers me is when I hear people say things like: “Real estate only goes up. You can never go wrong.” I started my career pre-2008 and lived in both the United States and Ireland. I saw what down looks like.