The Building Industry and Land Development Association (BILD) announced its February (2017) numbers today for the Greater Toronto Area. Here are some of the highlights:

– At the end of February, there were 324 detached homes available in developer inventories. Ten years ago, this number was was 12,064 (detached only).

– There were more than twice as many condo apartments sold than low-rise homes in February.

– Condo inventory is also dropping and reached a low of 10,342 units.

– Average price of a new condo increased to $652 per square foot and the average unit size decreased to 802 square feet.

Here’s that information in a chart from Altus Group: 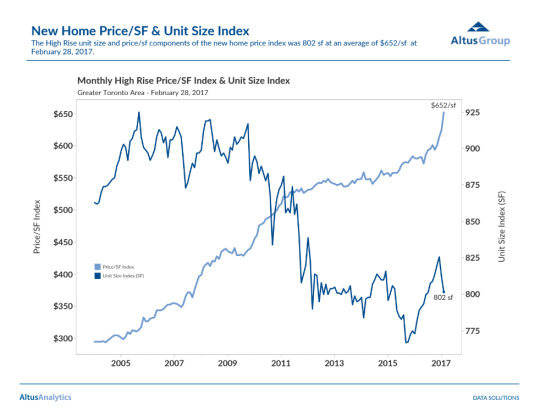 The overall story here continues to be about decreasing inventory and increasing prices. There’s also the ongoing shift from low-rise to higher density housing, which I don’t view as a bad thing.