Below is a mapping (by Taylor Blake of the Martin Prosperity Institute) of the top 10 metro economies in the world by GDP at purchasing power parity. In brackets, is a country with a comparable GDP. 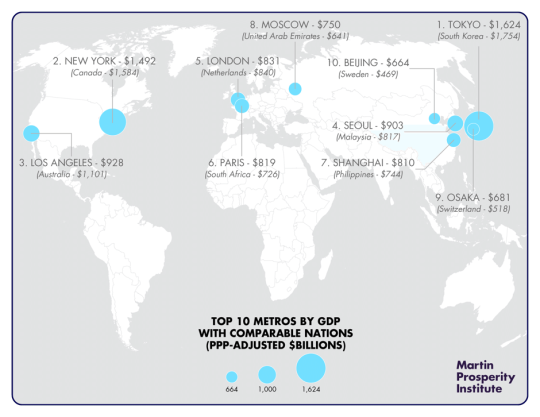 Tokyo is the world’s largest metro economy with ~$1.6 trillion in GDP. This is greater than the GDP of all of Canada. New York City is number 2 with ~$1.5 trillion in GDP, which is only slightly less than Canada.

The point of all of this – which Richard Florida argues here – is that the global economy is, today, powered by metropolitan areas. And yet our governance structures do not reflect this new reality.

Here’s an excerpt from Florida’s article:

“Cities really are the new power centers of the global economy—the platforms for innovation, entrepreneurship, and economic growth. But when it comes to fiscal and political power, they remain beholden to increasingly anachronistic and backward-looking nation-states, which has become distressingly obvious with the rise of Trumpism in the United States and populism around the world.”

Florida has been arguing this for years and I’ve really gotten behind it. The above chart is a good reminder just how big and wealthy some cities have become in today’s economy.