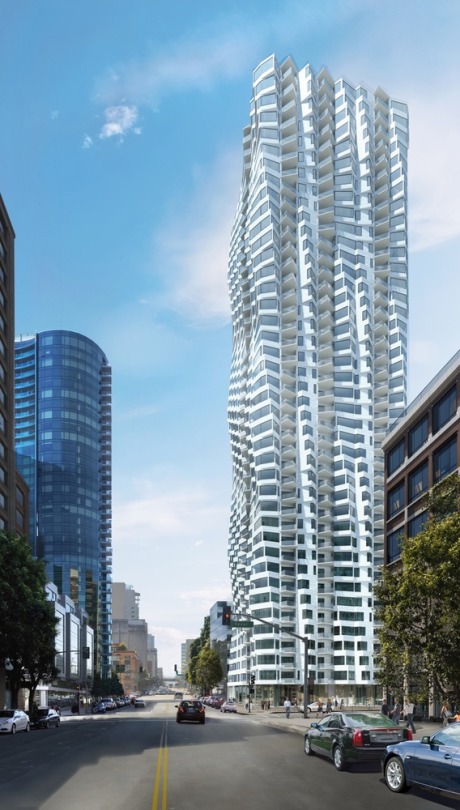 Today I am excited to announce that we (Slate) have retained Studio Gang Architects to design a new mixed-use residential tower at Yonge + St. Clair in midtown Toronto.

Alex Bozikovic was first to break the news in the Globe and Mail, but you can now also read about it at UrbanToronto.ca, in ArchDaily, and likely some other places.

Here is something I said to Alex that we feel strongly about:

“We’re considering the whole community,” Donnelly says. “By thinking of city-building rather than individual tower buildings, it opens up new possibilities.”

This is particularly true because of Slate’s broader position at Yonge + St Clair.

And here is something that Stefan Novakovic wrote over at UrbanToronto.ca that we were happy to read – thank you:

With no renderings, no precise indication of height, scale, or programming, and no hint at the building’s aesthetic—yet—it’s already a lock to be one of Toronto’s most anticipated upcoming developments. That’s because Studio Gang is no ordinary firm.

I’ve also pasted the full press release at the bottom of this post.

One thing you may notice is that we’ll be hosting a public consultation later this spring. This will be before we submit anything to the city. It’s part of our research and information gathering phase, and it will be used to inform the ultimate design.

I’ve been admiring Studio Gang’s work from afar for well over a decade. So it’s personally very exciting to be starting work with them on an actual project. We are thrilled about this announcement and I hope that many of you are as well.

March 10, 2017 (Toronto)—Slate Asset Management announces it has selected internationally celebrated architecture practice Studio Gang to design a mixed-used tower at the south-west corner of Yonge and Delisle. The announcement is the latest in a series of high-profile commissions by Slate, including an eight-story mural by international street artist Phlegm. The project will be Studio Gang’s first building in Canada, and is part of Slate’s overall effort to reimagine Yonge + St. Clair through the use of public art, world-class design, vibrant streetscapes and open spaces.

“Yonge + St. Clair is on its way back. Having occasion to bring Studio Gang’s first project in Toronto to the neighbourhood signals to the rest of the city that we would like to create something special here,” says Brandon Donnelly, Vice President of Development at Slate Asset Management.

“As our practice’s relationship with Canada grows, we’re excited to explore Toronto and to understand the unique DNA of the Yonge + St. Clair neighbourhood,” says Jeanne Gang. “We hope to design a building that will strengthen relationships within the neighbourhood and the city.”

Based in Chicago and New York, Studio Gang is widely recognized for elevating the urban environment while building connections between people and their environments. This ethos is visible throughout Studio Gang’s diverse portfolio, which includes Aqua Tower in Chicago, Folsom Tower in San Francisco, and 40 Tenth Avenue along the Highline in New York—each of which emphasizes connections between people, the city, and nature.

With a practice rooted in research, engagement, sustainability and the innovative use of materials, Studio Gang will work with Slate to host a public consultation later this spring to gather community input prior to a design submission to the city. The final building will be primarily rental, with retail space at grade, in keeping with Slate’s long-term vision for the area. And while the design for the building is not finalized, Donnelly says a couple of decisions have already been made.

“It’s not going to be a typical all-glass tower,” says Donnelly, citing a need to introduce material variety into Toronto’s ever-booming skyline. “We want to push boundaries in terms of sustainability and building efficiency, which means we are thinking carefully about the building envelope and its materials.”

The decision to commission Studio Gang was made after an exhaustive selection process emphasizing design methodology, site context, and Slate’s aspirations for world-class architecture and a fresh vision. Yonge + St. Clair is a transit-rich node with a subway and dedicated streetcar tracks. At the same time, the dense urban realm is a short walk from some of the city’s most beloved neighbourhoods and a ravine system, offering direct access to quiet green space. This juxtaposition of natural and built environments will serve as an inspiration for the project.

“There is a hill that crests at Yonge + St. Clair, which means the build site acts as both a pedestal and a view terminus from way uptown,” says Donnelly, detailing another unique advantage of both the site and the neighbourhood. “The challenge will be to develop a building worthy of being showcased, but we feel confident that we have the right team in place to do just that.”

Over the last four years, Slate has purchased ten properties in the area, including all four corners of the intersection at Yonge and St. Clair. The Studio Gang commission will be the first ground-up tower in the area by Slate, marking a unique collaboration that combines global experience and high design with a serious investment in the neighbourhood. The area’s transformation kicked-off last summer with the introduction of the eight-story mural by Phlegm.

Gang is being honoured at the RAIC/OAA Festival of Architecture in Ottawa, May 24–27. She will be named an Honorary Fellow of the College of Fellows of the Royal Architectural Institute of Canada and will deliver the keynote address at the festival.

Slate Asset Management L.P. is a leading real estate investment platform with approximately $4.0 billion in assets under management. Slate is a value-oriented manager and a significant sponsor of all of its private and publicly-traded investment vehicles, which are tailored to the unique goals and objectives of its investors. The firm’s careful and selective investment approach creates long-term value with an emphasis on capital preservation and outsized returns. Slate is supported by exceptional people, flexible capital and a proven ability to originate and execute on a wide range of compelling investment opportunities. Visit slateam.com to learn more.

Founded by MacArthur Fellow Jeanne Gang, Studio Gang is an architecture and urbanism practice based in Chicago and New York. Known for creating innovative buildings that enhance the public space around them, Studio Gang has completed award-winning projects such as the Aqua Tower and Nature Boardwalk at Lincoln Park Zoo in Chicago, Illinois, USA, and the Arcus Center for Social Justice Leadership in Kalamazoo, Michigan, USA. The Studio is currently designing towers in Chicago, San Francisco, New York, and Amsterdam. In addition, Studio Gang is currently engaged in cultural and educational projects across the Americas, from the new United States Embassy in Brazil to the expansion of the American Museum of Natural History in New York and a consolidated campus for the California College of the Arts in San Francisco. In 2016, Studio Gang was recognized as Firm of the Year at the Architizer A+ Awards and Jeanne Gang was named Architect of the Year by the Architectural Review. Visit www.studiogang.com to learn more.