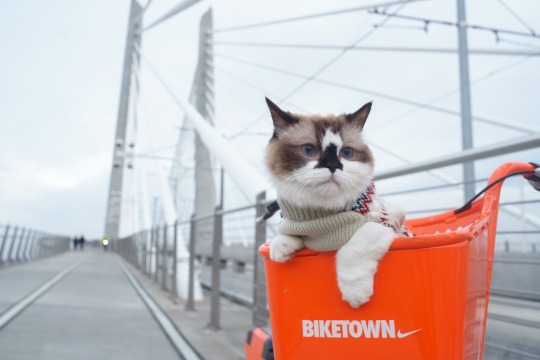 A new “bicycle house” recently opened up in Malmö, Sweden. It is a 7 storey apartment building that has been designed entirely around the bicycle. It’s called Cykelhuset Ohboy.

– There’s no parking for cars in the building. Apparently it’s the first building in Sweden to do that, which is surprising to me. I thought that would be more common.

– All of the access corridors were made wider so that it’s easier to maneuver your bike around, larger bikes can fit, and there aren’t any access issues when bikes are left outside of your apartment.

– All of the doors in the complex are 10cm wider than they need to be (and have door openers). The elevators are also larger and open up on both sides so you don’t have to turn your bike around.

– The building is equipped with cargo bikes and kid friendly bikes so that you can grocery shop and wheel your family around. The building does have larger family sized apartments and, according to Copenhagenize, the building is fully occupied.

In most, if not all, condo buildings here in Toronto, you’re usually not allowed to take bicycles in the elevators. And bikes sitting on balconies is considered a highly undesirable outcome.

But clearly that’s just one frame of reference for how the world should work.