The Guardian recently published an article on vanity height in skyscrapers. What this is referring to is the unoccupied portions of tall buildings which are built purely for vanity reasons – that is, to increase the face height of the building and claim some superlative title.

The tallest building in the world is currently the Burj Khalifa in Dubai. It’s 828m tall. To put that into perspective, the CN Tower in Toronto is 553m. But according to the Council on Tall Buildings and Urban Habitat, 29% of the Burj Khalifa’s height is actually unoccupied or “vanity space.” In other buildings, such as the Burj al Arab (also in Dubai), the amount of unusable space is as high as 39%.

For the purists out there, this of course raises the question of what should should be counted when assessing building height. Should it only be spaces where humans typically inhabit? The CN Tower has a lot of unoccupied space, which is why it is frequently excluded from these sorts of ego rankings.

But semantics aside, this is obviously not a new phenomenon and it’s interesting to think about this race to the sky as a proxy for what’s going on in the world. Below is a chart showing which regions have been able to lay claim to the “tallest building of the year” since 1900.

Since 1990, it has been all about Asia and Oceania and China and Taiwan… 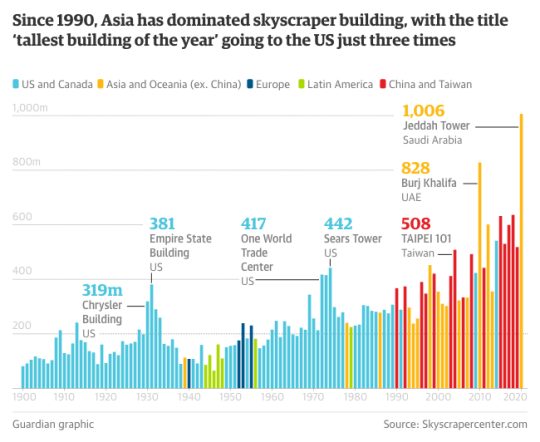