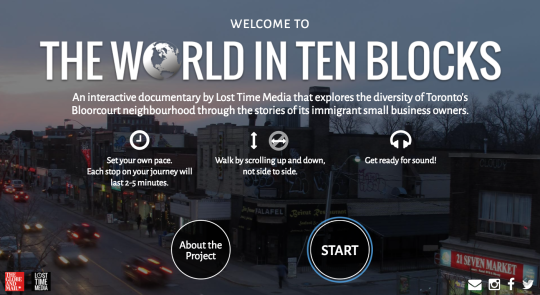 “Toronto is probably the world’s most diverse city.”

That is how a new interactive documentary called The World in Ten Blocks starts. Produced by Lost Time Media and hosted at theglobeandmail.com, the documentary examines a ten block stretch of Toronto’s Bloorcourt neighborhood and tells the story of a diverse set of small-business owners who have moved to this city from all around the world. People from Guyana, Mexico, Nicaragua, Saudi Arabia, as well as many other places.

It’s amazing to be reminded just how diverse ten small blocks of this city can be; especially at a time when immigration has become such a polarizing topic around the world. I sometimes take it for granted just how diverse this city is. I forget and assume that this is just how cities are. But of course that is not always the case. Toronto is an exceptional city.