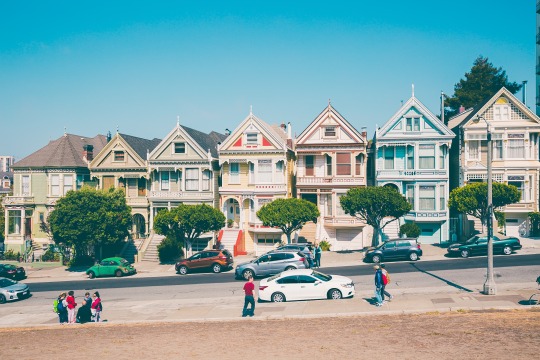 Because of stats such as these, Freakeconomics recently asked: Is the American Dream really dead? And if so, should it instead be called the Canadian Dream, seeing how it’s more readily obtained.

Of course, it’s not necessarily as simple as 7.5% vs. 13%. Upward mobility exhibits a lot of regional variation. In the American southeast, the number is closer to 4%. Whereas in the San Francisco Bay Area, the number is up there with Canada and Denmark. However, this phenomenon is so location-specific that even kids growing up in San Francisco are twice as likely to get to the top 20% compared to kids growing up across the bridge in Oakland.

There’s also a question of spread. Canada and Denmark have less income inequality, meaning you don’t have to travel as far to get to the top of the income distribution.

Still, the reality is that it is becoming harder for Americans to climb the socioeconomic ladder. The number of 30-year old Americans who today earn more than their parents is dropping compared to previous decades. So what needs to be done? What is causing this erosion of the American Dream?

It turns out that city builders have an important role to play in solving this problem. Because where you live – and in particular where you grow up as a kid – matters.

The Freakeconomics episode examines a study that was done by Raj Chetty, Nathaniel Hendren, and Lawrence Katz, called: The Effects of Exposure to Better Neighborhoods on Children. And their findings were exactly that. Place matters. The study reexamines the findings of a program that was administered in the mid 1990′s in the US called Moving to Opportunity (MTO). This program randomly offered families living in high-poverty neighborhoods the opportunity to move to neighborhoods with far less poverty.

Upon initial review, the program was seen as a failure. There were some positive health outcomes, but no meaningful changes in income. But when Chetty and company took another look at the data – now with more time and IRS data on their side – they discovered that the impact was in fact dramatic. Relocated families raised children that earned 30% more, were 27% more likely to go to college, and 30% less likely to be a single parent. The key, however, was that the children had to relocate when they were young (< 13 year olds). The older they got, the less benefit they received from moving, eventually reaching a plateau where there was basically no benefit at all.

Here are the 5 things that ended up having significance in their findings:

All of the stats for this post were taken from this Freakeconomics Radio episode. For me, it is such an important reminder that the way we plan and build our cities can have meaningful and longstanding impacts on the kinds of children we raise.