The following image is a geographic representation of Lafayette, Louisiana’s finances. It is from this excellent article by Charles Marohn. 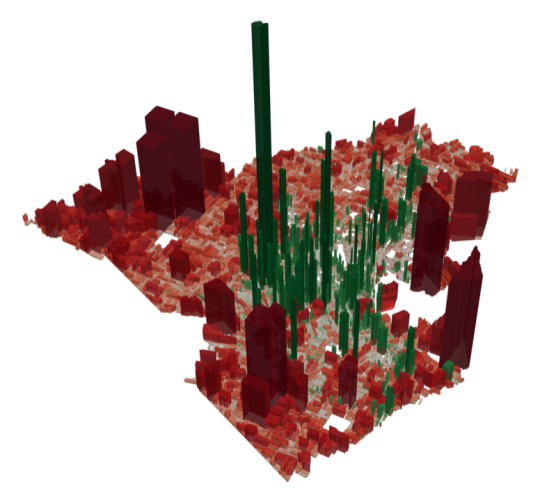 What this 3D map shows is the city’s revenues and expenses by land parcel. The green areas are where the city is making a profit (revenues exceed expenses) and the red areas are where the city is operating at a loss (expenses exceed revenues). The height of each extrusion indicates just how much profit is being made and how much loss is being incurred.

The glaring takeaway from this study is this: not only are post-war land use patterns environmentally unsustainable, but they are also fiscally unsustainable. The tax base is simply not there to pay for the infrastructure that gets built alongside it.

They – the authors of this study – estimate that the infrastructure revenue gap for the median home in Lafayette is about $8,000 per year (median household income is $41,000). And yet despite this shortfall, it is common to look at infrastructure spending as a desirable economic stimulus.

“All of the programs and incentives put in place by the federal and state governments to induce higher levels of growth by building more infrastructure has made the city of Lafayette functionally insolvent. Lafayette has collectively made more promises than [it can] keep and it’s not even close. If they operated on accrual accounting – where you account for your long term liabilities – instead of a cash basis – where you don’t – they would have been bankrupt decades ago. This is a pattern we see in every city we’ve examined. It is a byproduct of the American pattern of development we adopted everywhere after World War II.”

Thank you Daniel for sharing this article with me.

If you only read one other thing today (besides my blog), I recommend you read Charles’ article. It’s called: The real reason your city has no money.