The London-based architecture firm, Assemble, has recently put their old studio space up for sale at

Completed in 2014, the 250 square meter building was designed and constructed by the firm using modest and, in some cases, prefabricated materials. Total construction costs were £291/m².

The building has since been disassembled and put into storage until a buyer comes along, which tells you a lot about how it was built in the first place.

But what’s great about the building is that, despite its modest roots, it was highly celebrated. The front facade is clad in colorful concrete tiles, which supposedly made it one of the most Instagrammed buildings in London.

Here’s a photo of what that looked like when the building was still put together: 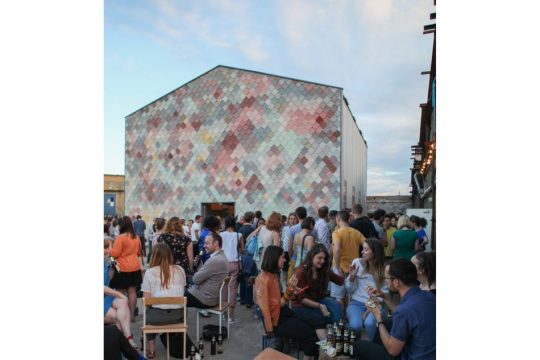 The front faced a “public yard” – hence all of the people in the photo and why it seems appropriate to call it a Yardhouse.

According to The Modern House (they have the listing), the building is already under offer. So if you were in the market for a Yardhouse clad in multicolored concrete tiles, you may be too late.

But perhaps you’ll draw some inspiration for your next project.