The #QLINE is back on the road for testing today! Take a pic and tag @M1RAIL if you see the streetcar. #WeMoveDetroit pic.twitter.com/K42aHxebgG

Note how the train is running curbside.

There’s lots of debate about the economic benefits of streetcar/LRT over other transit solutions such as BRT. But if you’re a regular reader of this blog, you’ll probably know that I am a supporter of light rail.

In the case of Detroit, I also think there’s symbolic importance to bringing back light rail to the core of the city. The last Detroit streetcar was shut down in 1956.

It’s also worth mentioning how the streetcar line was funded. Below is a breakdown of funding sources dated 2014. 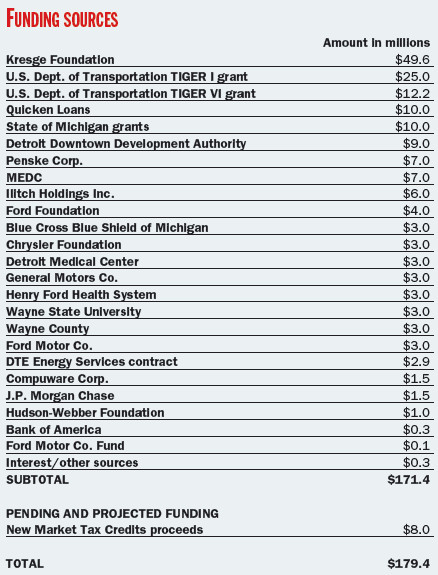 There may have been some changes since then, but it’s positive to see the public and private sectors come together, alongside a large infusion of philanthropic money (The Kresge Foundation).

Many of the companies on the above list sponsored individual stations. The cost to do so was $3 million, which is why you see that number show up a few times. Compuware and JP Morgan Chase shared a station at $1.5 million each.

Is this a transit funding model worth replicating?