The New York Times posted an interesting article today talking about how roommates in the city are dividing and conquering expensive rentals using temporary walls. This is obviously not a new practice. But it’s a good case study in what people will do in order to make living in a specific location affordable – in this case, Manhattan.

The first example is a one bedroom apartment that was converted to a 4-person apartment. Here is the floor plan (from the New York Times): 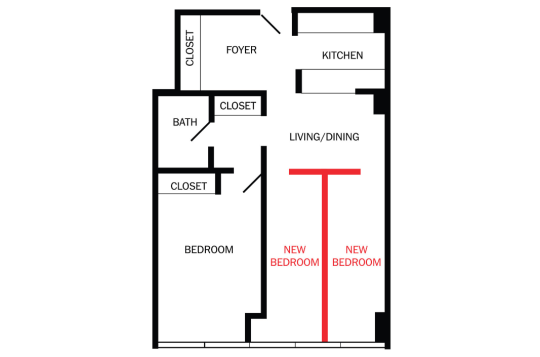 The living/dining room was divided up using a T-shaped partition wall – which is required to stop 2 feet shy of the ceiling – to create two additional bedrooms. The original bedroom is then shared via two twin beds. Et voilà. Now you have an apartment where the $3,750 per month rent becomes less than $1,000 per person.

Probably the most annoying thing about this setup would be the lack of acoustic privacy. Since the partition walls don’t go all the way up to the ceiling (photo here), you’d obviously hear everything. One person in the article described it as living in the same room as all of your roommates, but not being able to see anyone.

Mr. Meyer, 23, has the smallest room by far. “It kind of feels like you’re living in Harry Potter’s cupboard,” said Mr. Meyer, who is in his freshman year at Columbia after serving for three years in the Israel Defense Forces.

The roommates, three of whom grew up together in Toronto, don’t mind the close quarters or the lack of privacy. “It’s definitely not for everyone,” Mr. Meyer said. “When you live with your best friends, it couldn’t be better. We hardly spend time in our rooms.”

I saw a lot of this here in Toronto while I was in undergrad. 55 Charles Street West was always a great candidate for these sorts of hacks because the units are large and because the building is filled with solariums. Inevitably, they became additional bedrooms.

(Sidebar: My understanding is that there was a period of time in Toronto where solariums were excluded from gross floor area calculations. So developers used to always put them in to capture more area. That’s why buildings of a certain vintage always seem to have them.)

In any event, the above certainly makes the case for more micro units and co-living arranagements. Many people seem willing to deal with a variety of living situations in order to live where they want to live. Urban affordability is certainly a global concern.