This morning I came across the below graph in a Medium article by Eric Jaffe of Sidewalk Labs. It is taken from a research paper by Elisabeth Ruth Perlman called, Dense Enough To Be Brilliant: Patents, Urbanization, and Transportation in Nineteenth Century America. 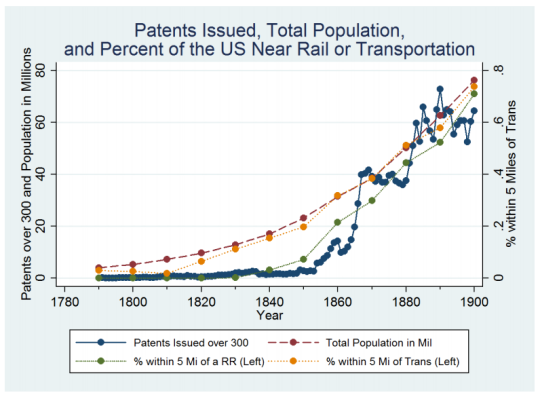 What this chart shows is patents issued – a proxy for innovation – in all U.S. counties between 1790 and 1900. This data is then compared against access to transport, such as rail. The discovery is a statistically significant relationship between innovation (patents issued) and rail (transport) access.

The spike in the 1850s (shown above) is as a result of increased rail access.

But Perlman takes it a step further and asks: what is causing this spike in innovation? Is it because inventors and creators started responding to the larger market now accessible to them because of rail connectivity? Or did transportation somehow improve productivity and the flow of information?

To answer this question, she dug into the patents themselves (over 700,000 of them) to try and identify how ideas and key words were spreading. What she found is that rail access alone doesn’t encourage innovation. References to new technologies did not increase.

What mattered was what happened locally. Transportation improvements promoted urbanization and density during her study period, and that’s what drove innovation. Connectivity created agglomeration economies at the local level.

This is an important lesson to consider as we build our cities and invest in transportation. Rail alone isn’t enough. What matters more is what we build around it. Are we dense enough to be brilliant?