Urbanist Richard Florida has spoken a lot about a “great inversion.” This is about poverty moving to the suburbs and the core of cities becoming a kind of “gated suburb.” (i.e. wealthy)

In response to this narrative, City Observatory recently published a post where they call this a new mythology. Joe Cortright argues that it is simply an exaggeration that sounds good in media headlines. And indeed, if you look at some accounts of poverty, the swings haven’t been that dramatic.

However, if you dig into this study by Luke Juday at the University of Virginia (cited in the City Observatory article), there have been some interesting changes.

Below is a chart that shows the percentage of adults (over 25) with a bachelor’s degree (or higher) sorted by distance from the city center. This particular chart is a composite of 7 northeastern (US) cities. The brown line is 2012 and the orange line is 1990. 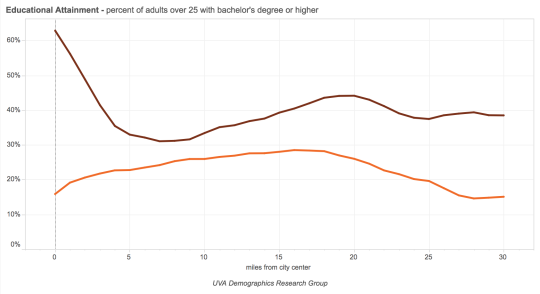 As you can see, there has been a huge spike in educated people living in city centers – at least in the northeast.

Here is that same chart for Atlanta: 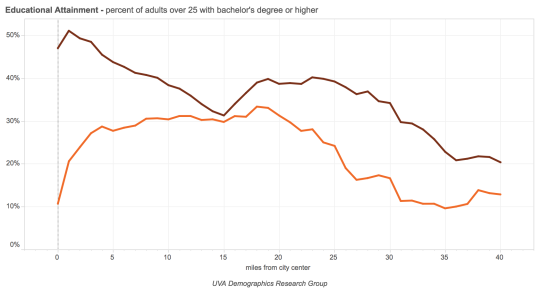 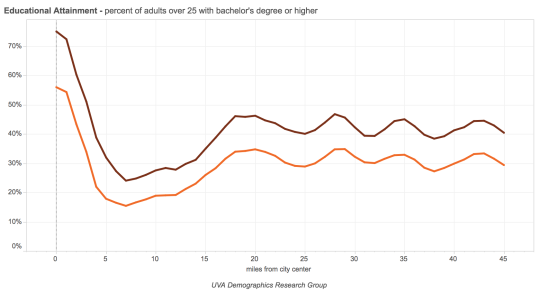 In the case of New York, it looks like the entire city just became more educated. 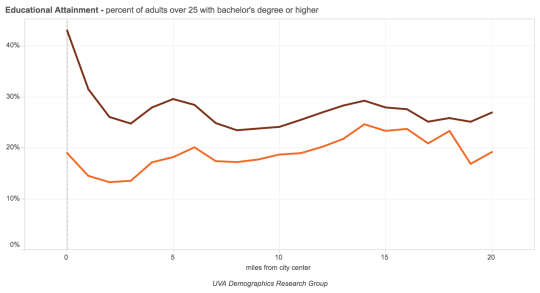 Educational attainment is often the single biggest determinant of income. So there is something to be said about highly educated people concentrating themselves in city centers. We may not want to call it an inversion of great proportions, but it’s a meaningful shift.