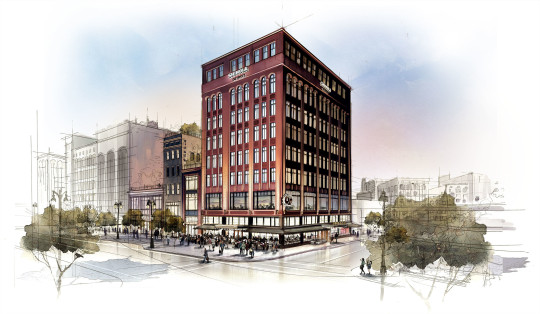 Hotels play such an interesting role within cities. They are public-facing in a way that many other uses are not and they invite a mixing of different people – everyone from transients to locals. It is therefore no surprise that they can serve a variety of different roles. They can be cultural hubs. But they can also be places in which to misbehave.

When the Drake Hotel opened up on the west side of downtown Toronto in 2004, I remember it feeling far out. It was on the edge of that which was interesting at the time. But it quickly anchored West Queen West with its cultural and nightlife offerings. And today, we could be about to see the exact same story repeat itself in the east end with the new Broadview Hotel.

It’s for these reasons that I was both excited and curious to learn that Bedrock (real estate company) and Shinola are in the midst of launching a new boutique hotel concept in Detroit. It is called The Shinola Hotel. It will be located at 1400 Woodward Avenue. And it will be all about the city of Detroit. They expect it to open sometime in the fall of 2018.

What I am about to say may be an availability bias talking, but there seems to be a push by many companies into the hotel space. In 2015, Equinox Fitness announced that it would be opening its first hotel in 2018 at Hudson Yards in New York. And just last month furniture retailer West Elm announced that it would be opening a first set of hotels in both Savannah and Detroit. (Go Detroit!)

West Elm sells furniture. Equinox operates gyms. And Shinola makes and sells watches, bikes, and leather goods. But all of them are now in the hotel space. What other new hotel brands have I missed?