Tesla has just announced “full self-driving hardware” on all of its cars, including the upcoming Model 3, in anticipation of a big software update to be released sometime around December 2016 (hopefully).

This will enable fully autonomous driving “in almost all circumstances” – they mention rain, fog, and dust, but no snow – at a level of safety that Tesla believes is already 2x better than the average human driver.

This is being accomplished through a souped up onboard computer and by increasing the number of surround cameras from 4 to 8. Here’s a diagram (via Tesla) of how those cameras work and how they will capture a 360 degree view: 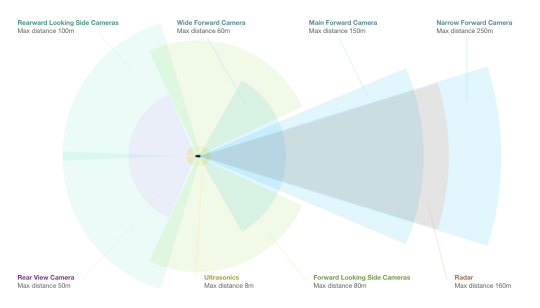 A couple of immediate thoughts / takeaways:

The Smart Summon feature is obviously very cool. Summon on your smartphone and your car will come find you. Elon Musk has said that it will eventually find you even if you happen to be on the other side of the country.

But this assumes that there are solid metal snake chargers (or something else) to automatically charge your vehicle somewhere on route. It also suggests that the vehicles won’t be equipped to cross international borders by themselves.

Elon Musk has said that (unfortunately) retrofitting older Tesla vehicles to full self-driving hardware will be very difficult and costly – the cost delta is greater than buying a new car. This reinforces my belief that leasing, rather than owning, is probably a wise strategy right now given how much change is happening in the auto space.

“Please note also that using a self-driving Tesla for car sharing and ride hailing for friends and family is fine, but doing so for revenue purposes will only be permissible on the Tesla Network, details of which will be released next year.”

If you’d like to see a full self-driving Tesla in action, check out the video on their website.