Zooming out, it is also one of the fastest growing industries in the city: 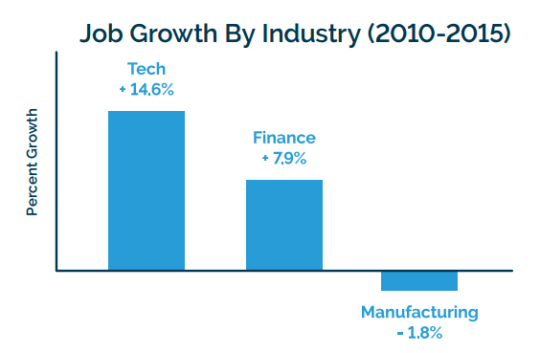 To try and put this into perspective, a similar report for New York – published in 2014 – reported 291,000 tech jobs out of 4.27 million people employed. I was a bit surprised by these numbers, but the Toronto report seems to have been modeled after the New York one. So presumably they use similar methodologies.

Of course, there’s the big question of quality over quantity. There’s a certainly a difference, in terms of impact to the economy, between a back office tech job and fast growing startup that will eventually reach the coveted $1 billion valuation number and create thousands of new jobs.

Obviously every city is hoping for the latter.