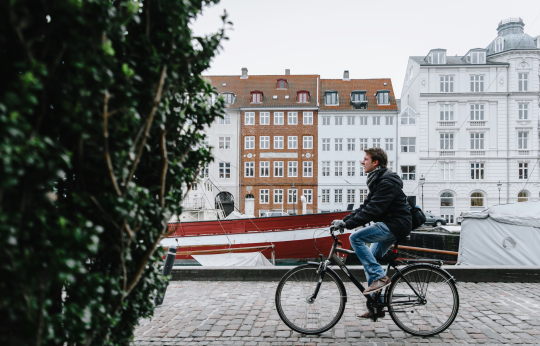 The following paragraph is a great way to describe urban cycling and to explain how our built environment can explicitly invite certain behaviors:

“If you want people to drive, build more automobile infrastructure. If you want people to bike, build better bike infrastructure. In San Francisco, as in most US cities, we’ve treated the idea of bike infrastructure as secondary to optimizing traffic flow, and have wound up protecting parked cars with bike lanes instead of the opposite. Because of this our bike lanes are plagued with double-parking. While enforcement is an important piece of the puzzle, we usually fail to admit how inviting a striped space between parked cars and traffic appears to an Uber driver. Our built environment invites a driving behavior that causes cyclists to spend much of their commute pushed into traffic, encouraging a culture of every-man-for-himself cycling behavior, adding to the discouraging perception that bikes are for the young and fearless only. This perception is elevated by the fact that bicycling deaths in San Francisco are hovering at least four times higher than the average rate in Copenhagen, a city with ten times as many cyclists.”

This snippet is from a blog post written by Alex Schuknecht (urban designer with Gehl). In the posts he also contrasts the cycling cultures of San Francisco and Copenhagen – two cities of similar size and density, but with fundamental differences. It’s a good read.

Many of us probably assume that we are agents of our own lives. We decide what we do and when we do it. We’re our own boss. That’s at least how I want to feel.

But the built environment is distinct from the natural environment in that we design it. It is not a given. And the environments we collectively choose to fund and build will ultimately have a significant impact on the way we “choose” to live our lives.

This gets back to the first line of the above quote: build more of this; get more of that. It’s also related to the startup mantra: “you make what you measure.” If all we’re measuring is traffic flow, then that’s the kind of city we will make. And that’s certainly be done.

I don’t think a lot of us think in these terms. But we should.