Earlier this month, The Atlantic published an article called: The Free-Time Paradox in America. The gist of the article was that the wealthy are increasingly starved for time, whereas the exact opposite is happening to the poor.

The article throws out this stat: “In 2015, 22 percent of lower-skilled men [those without a college degree] aged 21 to 30 had not worked at all during the prior twelve months.”

More recently, Larry Summers published the following graph on his blog, along with the prediction that by the middle of the 21st century over a third of men between 25 and 54 will no longer be working in America. 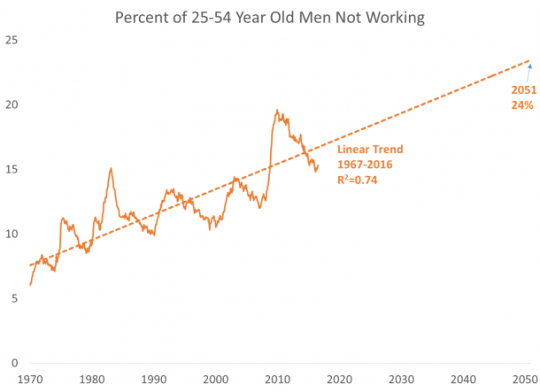 He cites technology and declining marriage rates as two possible explanations. Supposedly unmarried men are more likely to be out of work.

If you’re interested in this topic, Nicholas Eberstadt has a new book called Men Without Work. The focus is on a new class of men who are neither (1) employed nor (2) unemployed and looking for work. Instead they voluntarily electing not to participate in the US labor force. Similar to Ed Glaeser, part of his argument is that the incentives not to work (welfare) are simply too great.

This drop in labor force participation is largely concentrated among those without a college education. The problem seems to be that we are no longer creating enough good paying jobs for the less well educated. So the way I see it is that we have two options: we figure out how to do that (again) or we focus ourselves on education and training.

Richard Florida has written a lot about elevating service and retail jobs to fill this gap. But I have never understand how that works. I think it comes down to figuring out how to better elevate people.