When I met with all of the lovely folks from Amsterdam last week, one of the things that I mentioned about intensification is that it is almost certainly a contributing factor towards innovation, agglomeration economies, and the overall startup ecosystem here Toronto.

I don’t know to what extent, but I feel it happening. And there’s lots of research correlating urban density with innovation.

The continued densification of Toronto means it is constantly becoming easier to schedule that morning coffee before going into the office or to pop into that meetup after work. And those sorts of things are hugely valuable in today’s economy.

I talked about a number of local startups in my presentation, including 500px, Wattpad and Wealthsimple. But I didn’t show any hard data. So I’d like to do that today. Below is a chart showing total venture funding (internet/software) and the number of deals (Seed to A/B/C/D) in Toronto since 2009: 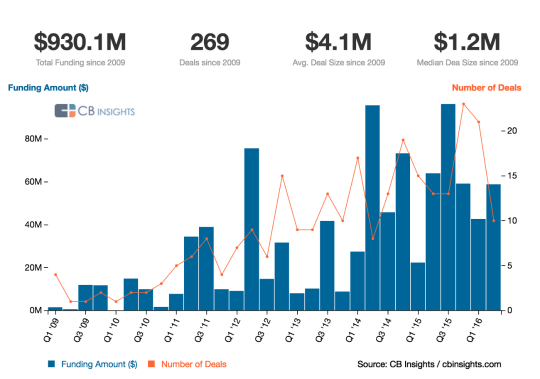 It was taken from this Medium post. Supposedly this places us 12th in the world as far as startup cities go.

Again, who knows how much of this venture growth has been helped along by intensification. After all: “Silicon Valley proper is soul-crushing suburban sprawl.” But I would bet money that it’s moving the needle in the right direction.

Here is another relevant post by venture capitalist Albert Wenger where he talks about the great startup ecosystem that Toronto is growing. He posted it earlier today.

All of this is important because some of these deals will spawn big companies. And those companies will the hire lots of people, as well as consume space.

Real estate developers like to talk about how they create jobs. And we do. But we can’t have a city of people just building buildings. People and businesses need to fill that space and that hinges on entrepreneurs who are willing to go out there and forge something new for themselves. Fortunately, Toronto seems to have a growing number of those kinds of people.