Polygraph (visually-driven essays) has a great piece called, The Entire History of Kickstarter Projects, Broken Down by City. What they did was look at 88,475 Kickstarter projects to map the various creative communities across the US.

Here’s a snapshot (you may need to zoom in):

In general, Kickstarter in the US sees a high concentration of music projects (24%) and film & video projects (19%). But where it gets interesting is to see which cities over-represent in certain categories.

Los Angeles = film & video (not surprisingly 45% of all projects)

They also measured the size of each project (number of backers) and created these neat bubble diagrams: 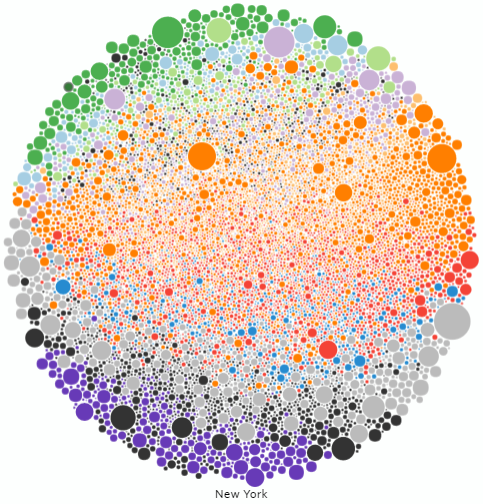 Above is New York. Red is music. Orange is film. And yellow is theater.

I also like their explanation for why they did this project:

Pretty much all existing attempts to map creative communities use census and jobs data. But creative efforts are often side-hustles. They’re garage/basement/cottage industries that will not appear in a census.

It’s true. This data should be a much better capture of each city’s creative soul.