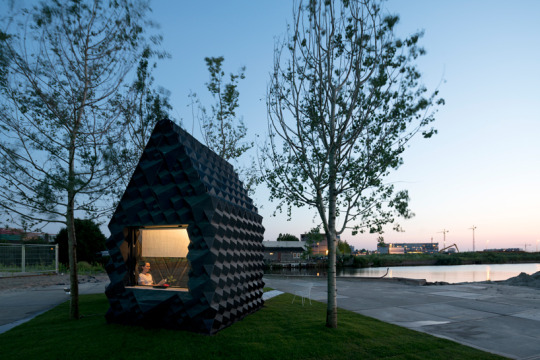 Things have been far too serious around here this week with talk of interest rates, unrealized gains, flooding, and the EU referendum. So let’s change that and do a bit of an architecture roundup. It has been on my agenda for a few weeks now to move toward some sort of regular post about architecture and design.

DUS architects of Amsterdam recently completed a fully 3D printed urban cabin (pictured above). It totals 8 square meters and was printed using “bio-plastic,” which means the entire structure could be shredded and reprinted into something else. The Urban Cabin is a research experiment, but the thinking is that 3D printed homes could serve as an “on-demand housing solution” in rapidly urbanizing cities, in disaster areas, and so on. That said, the niche use case can quickly become the mainstream use case.

REX has just released their design for a Performing Arts Center on the World Trade Center site. The design is a minimalist “mystery box” that provides an infinitely customizable interior canvas for directors. I have long been interested in the work of REX because of the hyper-rationale approach they quite often bring to architecture. It’s about allowing architecture to emerge from the project’s constraints, programmatic requirements, and so on. Here’s a video of the project.

Finally, this Swiss chalet (not the restuarant) in the town of Anzère has got me pretty excited about the upcoming snowboard season. It was designed by the Amsterdam-based firm SeARCH. And I love the dichotomy between the raw exposed concrete and the softer wood details. Also note how the garage, situated beneath the house, is built into the mountain. It is connected to the house above via an elevator that is also carved into the mountain. Sadly, my ski retreats don’t typically involve James Bond-style lairs.