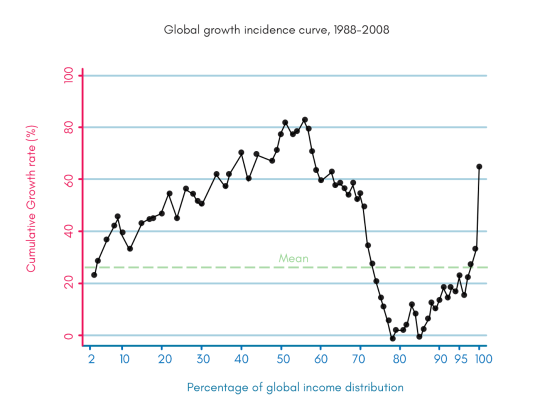 It is known as the “elephant graph” because, well, it kind of looks like an elephant. The trunk is on the right.

What it shows is global cumulative real income growth from 1988 to 2008 for every percentile around the world.

The trunk on the right is the world’s 1%. Their income is up.

The 50-60th percentile range is also up. These are people in the developing world who started making a bit of money as a result of industrialization. In percentage terms things look good, but in absolute terms they’re not making a lot of money. Still, they are becoming better off.

Where things fall apart is in the 75-90th percentile range. These are essentially the lowest income folks in the developed world. Their incomes haven’t been growing at the same rate and, in some cases, their incomes decreased in real terms. They are falling behind.

Kaila Colbin wrote a Medium post about this graph and asks whether the exponential growth in technology that we are seeing today, will end up creating more jobs than it eliminates – as it did before in the past.

She also wonders whether the dip we are seeing in the 75-90th percentile range could spread left as automation eliminates jobs for those folks in the developing world.

These are important questions.