He basically says that “many people” should go out and buy a home given the current state of the US housing market and the historically low interest rates. That’s a perfectly fine argument. But it’s not all that interesting.

The article does, however, have a moderately interactive chart showing the percentage of US households that own their homes. 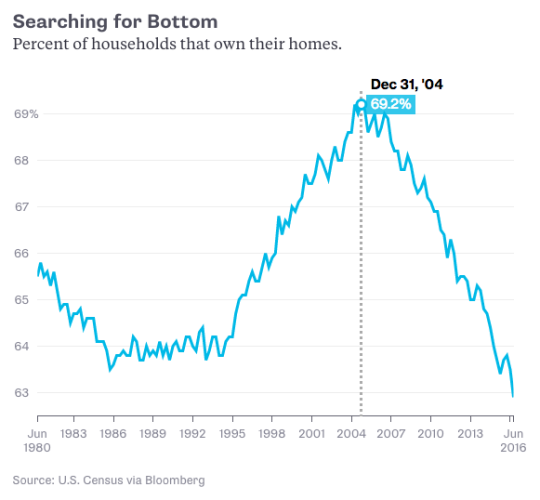 And it shows, somewhat surprisingly, the recent “search for bottom.” I knew there was a significant post-2008 decline, but I guess I thought it had stabilized. Instead, the US is hitting homeownership rates not seen since the mid-1960s. 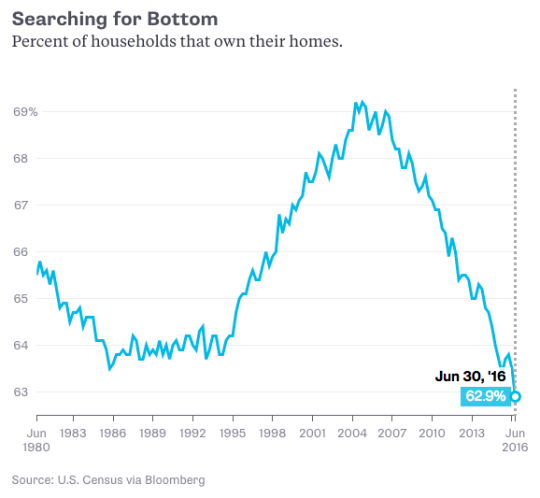 Big cities tend to have a higher percentage of renters. Millennials are flooding into cities. The digital economy now encourages mobility, which contradicts traditional notions of homeownership. There are all kinds of potential hypotheses that could be extracted here.

But the other interesting thing I noticed in the article, was this:

However, at some point in life, you probably no longer want to have a landlord telling you what color your walls can be or become tired of having strangers share a wall with you. I am not a zealous believer that everyone should go out and buy a home. However, for many people, buying makes sense – especially with mortgage rates as low as they are (the current rate of about 3.45 percent for a 30-year fixed-rate mortgage is just 0.10 percent higher than the record low).

I couldn’t help but notice the embedded cultural bias. The inference is that when you rent, you share walls. In other words, you live in some sort of multi-family apartment.

But when you finally go out and buy a home, you graduate from that. You no longer need to share walls with strangers. Because an owned home equals a single-family detached dwelling. That’s how you know you’ve made it.

Well, I have shared walls in my owned home. I guess I’m not there yet. 🙂