What happens when wages and real estate prices become too high in a city? Companies start growing in lower cost locations. We’ve all seen this before.

Fred Wilson recently blogged about this “spillover effect”, citing a New York Times article talking about the growth of tech offices in Phoenix. As someone who sits on the board of many technology companies, he was noticing a thematic trend:

“A big theme of board meetings I’ve been in over the past year is the crazy high cost of talent in the big tech centers (SF, NYC, LA, Boston, Seattle) and the need to grow headcount in lower cost locations.”

We talk a lot about housing prices on this blog, and so I think it’s useful to see how this, along with high wages, also impacts companies. The two are interrelated.

Below is a chart from the NY Times article showing the US cities with the highest number of technology jobs and the most growth from 2010 to 2015. 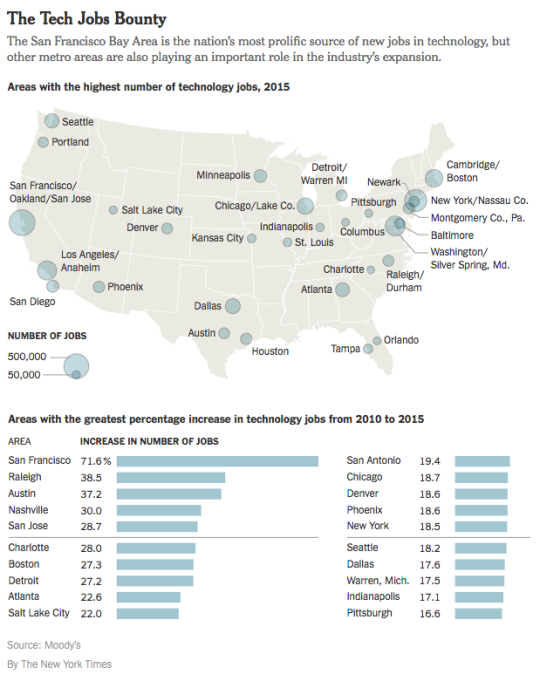 San Francisco is in a league of its own. But overall, the growth is in tech and many cities are adding lots of technology jobs. Look at Detroit and Boston right beside each other (Detroit obviously has a smaller starting base). And look at how Miami is nowhere to be found.

Of course, one interesting question is whether these new outposts – such as Phoenix – can truly come into their own and carve out a niche:

“We don’t want to be San Francisco’s back office — we need more creators here,” said Scott Salkin, a founder and the chief executive of Allbound, which is based in Phoenix, makes sales software and has offices down the hall from Gainsight’s.

Even with the high cost of living, it’s hard to supplant the coastal hegemony. That’s where people go to chase riches. As comedian Daniel Tosh likes to say, “the middle of the country is for people who gave up on their dreams.”

Though for some, living in a place like Denver or Salt Lake City and snowboarding every weekend is a better outcome than living in a studio apartment and commuting an hour to work.