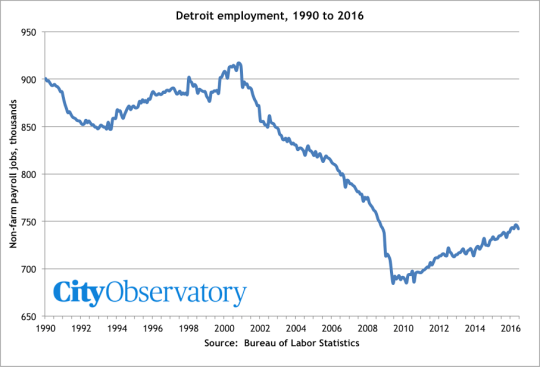 But we all know that Detroit is now a city on the move. According to City Observatory, Detroit has exhibited 5 consecutive years of job growth. And 2016 looks to be no different. Since bottoming out, Detroit has added more than 50,000 jobs.

The above chart is based on federal data for Wayne County, Michigan. It includes Detroit, Dearborn, and Livonia, but does not include any other counties within the Detroit metro area. (The above chart and stats are all via City Observatory.)

Of course, the big question is: Has Detroit made the requisite structural changes to its economy to keep this trend line continuing or is this simply a case of a rising tide lifting all boats?

I have visited Detroit basically every two years since 2009 and you can certainly feel the change, even in that short period of time.

And if you look at total non-farm employment growth over the last year (June 2015 to June 2016) for the entire Detroit metro area, you see that some of the fastest growing industries include: professional and business services (+14,200 jobs); leisure and hospitality (+10,500 jobs); education and health services (+9,300 jobs); and financial activities (+5,500 jobs). In fact, many of these industries are growing faster than national averages.

In case you were wondering, manufacturing added 1,200 jobs and government lost 1,800 jobs.

I’ve heard some people complain that the city, at least downtown, is now too controlled by one entity (Dan Gilbert). But that’s probably what had to happen to really kickstart the city’s renaissance. Somebody had to seed it before you could get the cool coffee shops, bars, restaurants, and coworking spaces.

There’s still heavy lifting to do, but the data suggests that the city is now headed in the right direction.

What are your thoughts? Also, if any of you are working on interesting projects in Detroit, I would love to hear from you.